Contains:  Shellfish, dairy, optional alcohol.  Is:  Quick and easy, gluten-free. (Unless you put it over wheat-containing pasta, or farro.)

When I dodged into the local small grocers in order to nab some dish detergent, I decided to see what other goodies I could get.  Okay, I didn’t actually get to go IN the store, but called from the cell phone from outside, and they looked for the things I wanted, then brought them out to me.  At any rate, they sometimes do carry seafood, so I asked for shrimp.  My first thought was I really wanted to make Vietnamese summer rolls – but suddenly I wanted to do something different with the shrimp.  So, yes, this inspiration is Italian, although it won’t be authentic (in part due to ingredients I have here).

Raw shrimp with a bit of ground pepper

A recipe titled “Creamy Garlic Shrimp Parmesan” appeared on the horizon.  I’d used up the last of my Parm, but Pecorino Romano isn’t that far afield.  The recipe called for cream, but buttermilk could substitute, so I went with that.  (Cream would be preferable!)  I also wanted the dish to have some vegetation in it – I’ve been making one course meals by and large – and I figured the cabbage I had would be fun.

So this IS NOT the same thing as the recipe I link to below – it is simply what inspired me, and I went with some of their suggestions.  Oh, yes… the white wine is gone, so I said… eh, let’s try red, anyway.  Appearance of the dish may look best if you go with the white. I used buttermilk instead of cream – cream will curd up less than did the buttermilk.  So do go with cream if you have the opportunity.  But this is a time of life where you go with what you gots.

Here, I’ve just added the shrimp to the skillet with the already-cooking cabbage.

If you are peeling your own shrimp, reserve the peels in the freezer for future seafood stock.  This shrimp came already peeled, including the tails.

You can have this straight up; or over pasta, farro, rice or whatever starch suits your fancy.  (I was briefly tempted to use mashed potatoes, frankly….)

As always, scale up as needed.

Prep Time:  10 minutes.
Cook Time:15 minutes.
Rest Time:  Not needed.
Serves: 1.
Cuisine:  Italian.
Leftovers:  Yes, though I’d be tempted not to re-cook the shrimp, but serve it as a cold salad.

If your shrimp isn’t peeled already, peel and devein it, removing the tail shell portion as well as you wish.  Be sure to set up your mis in place as the cooking procedure goes quickly.

Pan fry the cabbage in the cooking oil for about three minutes, flipping often, at medium-high.

Add the salt and pepper to the shrimp, and toss.  Then lay the shrimp out in the skillet, having moved most of the cabbage out of the way.

Remove the shrimp and cabbage from the skillet into a bowl, then return the skillet to the burner/hob.  Add the garlic, stir for about 20 seconds, then deglaze with the wine.  Allow much of this to evaporate, and reduce heat, before adding the cream.  The cream WILL provide a more creamy texture to this than did the buttermilk.  In both cases keep the heat low enough that this doesn’t curdle.

Add the cheese, and stir until just melted.

Return the shrimp and cabbage back to the skillet, and stir until these items are coated, maybe a minute.

You can plate over the carb of choice, or serve with out any carb base.  (I made farro cooked in homemade vegan broth, and served this atop that.)

Serve, adding parsley atop as desired.

I put my shrimp dish over farro.  (Farro does contain gluten, but much less than standard wheat – not recommended for celiacs, but those with a mild gluten sensitivity rather than the full-blown affair may be able to use this.  Rice, however, is a wonderful alternative, as is a rice-based pasta/noodle.  Or, that useful cauliflower rice.  I cooked my farro using vegetable broth – if you use your home made veggie broth, dilute as desired, add a little salt to taste, then add to the farro (or rice) and cook as per package instructions. 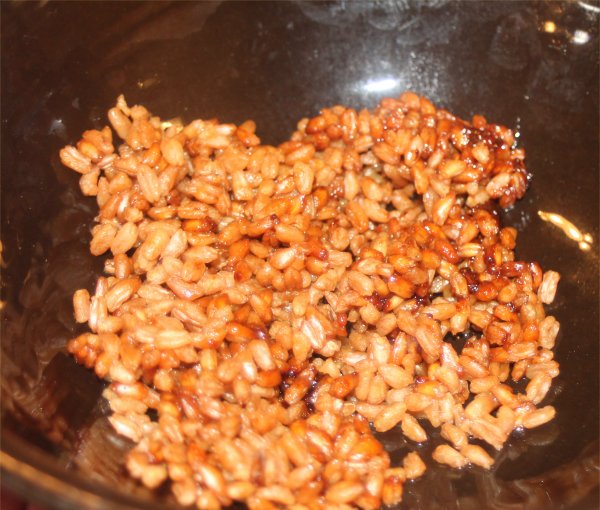 This was the inspiration video.

The foodie me: Low/no gluten, low sugars, lots of ethnic variety of foods. Seafood, offal, veggies. Farmers' markets. Cooking from scratch, and largely local. The "future" me: I've now moved to my new home in rural western Massachusetts. I am raising chickens (for meat and for eggs) and planning for guinea fowl, Shetland sheep, and probably goats and/or alpaca. Possibly feeder pigs. Raising veggies and going solar.
View all posts by goatsandgreens →
This entry was posted in Cooking, Seafood and tagged Cabbage, cheese, Garlic, Gluten-Free, Italian, pecorino, shellfish, Shrimp, Wine. Bookmark the permalink.