Posted on June 2, 2020 by goatsandgreens

I am planting, and still planting.  This is western Massachusetts, at a higher elevation than central-lower New England, but no where near as cold as long as is northern New Hampshire nor much of inland northern Maine.  So some seeds will go in later.

Yes, a lot of the veggies are planted close to each other — but hence comes microgreens.  Just think accordingly.  Observing things, next year I will seed the crops just a little further apart from each other.  But, seriously, I’m not really regretting the upcoming crop of microgreens.

Bed 2b. Spinach the first three rows (front to back). The third row was planted about 2-3 weeks later. Behind, a row of arugula. Behind that, just emerging cilantro.   Not really seen behind:  double rows of Thai and Chinese greens.

I  am LOVING my raised beds.  They were installed by early-mid July last summer (2019).  I grew a few things there last year, but the season was not long enough for my desires.

Here is the overall plot: 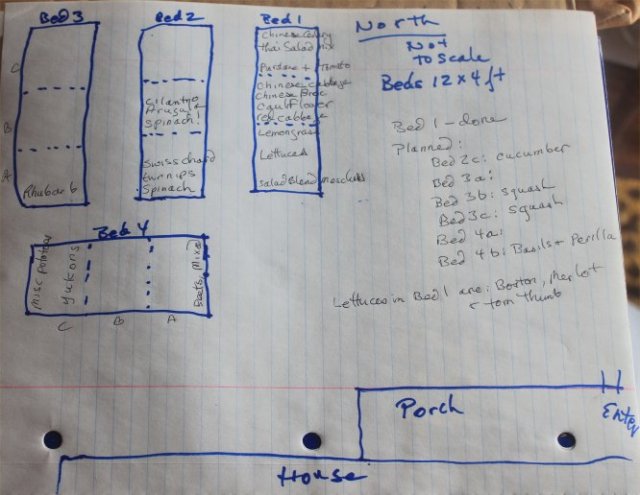 I’ll focus in on the actual plan details as this post progresses. There is actually another bed (mostly for herbs) to the east of the house, but not detailed today.

I love Yukon gold potatoes. Bed 4c has 3 rows of them, and a row and a half of undiscerned taters that are now also a part of this garden.

Bed 4c. Most are Yukon golds. My fave.  I have to start hilling them later this week.

Bed 2c was my potato area last year.  They didn’t get to grow large due to late planting, but they did do well.   I need to sort through that soil to remove any old remnants, turn it, and by mid June, plant cucumber seeds.

Bed 1. You can see why I am labelling bed sections as a, b, and c – it’s due to the dividing lines. This bed is completely planted – seeds in the back haven’t stuck their noses out of the soil yet. 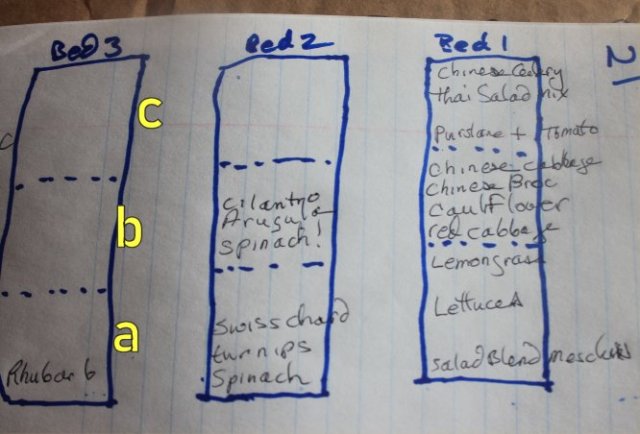 Close-up of plan for three of these beds.. Still have room in bed 2c, and most of bed 3.

The foodie me: Low/no gluten, low sugars, lots of ethnic variety of foods. Seafood, offal, veggies. Farmers' markets. Cooking from scratch, and largely local. The "future" me: I've now moved to my new home in rural western Massachusetts. I am raising chickens (for meat and for eggs) and planning for guinea fowl, Shetland sheep, and probably goats and/or alpaca. Possibly feeder pigs. Raising veggies and going solar.
View all posts by goatsandgreens →
This entry was posted in Garden, Gardening, Vegetarian and tagged crops, homesteading, vegetable seeds, Zone 5. Bookmark the permalink.