Posted on June 5, 2020 by goatsandgreens

A breakfast I’ve never tried (or eaten) before!

J. Kenji Alt-Lopez is making home cooking videos these days.  He does these POV style with a Go-Pro mounted on his forehead, so you see what he sees.  Editing is minimal, but the discussion of how and why he’s cooking a dish shine through.   Most of the meals look great, and mostly they’re geared for serving himself, his wife, and a small child.   (Wife and child stay off-camera, but the family dog follows Kenji around, and apparently gets a small bite at the end of each bout of cooking.)

Yes, this is Celeste’s egg. She was meant to be (and sold to me as) a broiler. But she’s too friendly to eat! The egg is more of a medium than a large.

Apparently, the term “oyakodon” relates to “parent and child” – the name sounds like a derivative of a prescription painkiller, however.  The parent is chicken, the child is the egg.  (The egg in this case was laid by my pet hen, Celeste.  I figured to honor it by using it for this meal.  And NO, Celeste was not the adult chicken involved in this dish!  And NO, I usually do not know who lays what eggs – just happened to be good timing at the henhouse on my part.)  For the chicken, I used a skinless, boneless chicken thigh.

I woke up hungry and tired. Were I attempting a professional plating for photography, that would be a pot of green tea, and not a French press of coffee… It would have been staged differently, too. (The yolk is nestled in the egg cup).

Being a Westerner, I’m not used to rice being a breakfast item (other than Rice Krispies cold cereal), but most of Asia (look at congee) apparently differs.

Cooking, chicken has been fully cooked; the whole egg has been added, and I’m mixing it up.   If you recognize this small rectangular skillet, it is intended for cooking tamagoyaki (Japanese omelettes).  But it was small enough for this purpose.

Dashi (typically made from dried bonito fish flakes and kombu seaweed, although there are vegan variants using dried shiitake)  is used in the recipe for full authenticity; however I currently lack dashi and wasn’t about to make some up for breakfast.  (Kenji used powdered dashi – I do prefer to make my own and thus didn’t have either…) 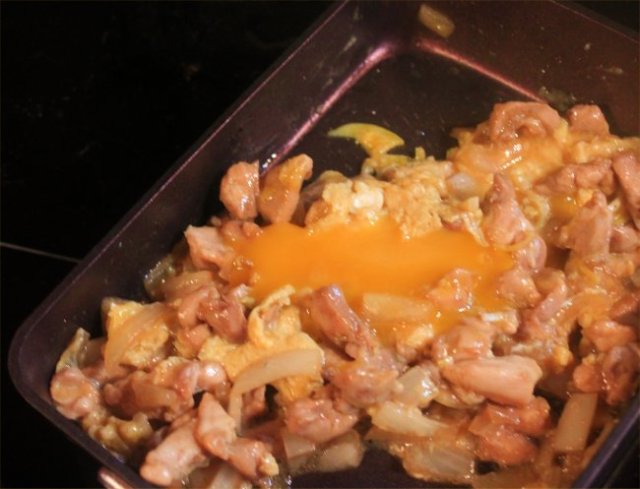 This recipe serves one – and actually he only made this for himself, anyway.  I cooked the rice and timed the rest of the dish to be ready shortly after the rice was.  You’d use sushi rice, and you can optionally season that like one would season rice for sushi – or not.

Finished, and in a bowl, with a scattering of leek atop.

Liquids:  total volume about 3 tablespoons worth:

While the rice is cooking (if you aren’t repurposing leftover rice, which you will probably want to sprinkle with water and re-heat that way…) prepare everything else:

Onion:  slice and then chop into small pieces.

Add chicken and onion to a lightly oiled small skillet – there is actually such a thing as an oyakodon skillet, but use what you can.   Add the liquids that come to about 3 tablespoons worth volume, but keep some additional liquid near by should you need more.

Egg, beat lightly with a little of that dash of tamari, and most of the leek or scallion garnish.  Set aside.  Leave the yolk, if using, aside.

Cook the skillet contents on medium – medium high, loosely covering with foil or a lid, for about ten minutes, or until the chicken is DONE through.  You’ll stir periodically, and also watch the liquid volume – you don’t want too much liquid nor do you want it all to evaporate  Add a teaspoon or so of water as you go on.

Hopefully you’ve timed your rice to be done by now.  Just keep the rice hot in the pot, avoiding further cooking.

Add the beaten egg and stir into the chicken and onion.  You can keep it loose or cook it egg-dry.   I opted for a middle range.

Pour the rice into your serving bowl.

Add the yolk to the skillet, and gently break it.  Both Kenji and I like runny yolks, so we only cooked this about 20 seconds more (if that).  If you want yours harder or you don’t trust your egg source, obviously cook this longer.

Pour all this over the rice in the serving bowl, allowing some of the yolk (if still runny) to drip into the rice.  Top with the last of the garnish.  Serve and eat.  Chopsticks optional.

I think next time I make this, I’ll add toasted sesame seeds over top.

Thank you, lady Celeste!  Your egg was lovely!  (And yes, I know those chopsticks are Chinese, not Japanese.  I don’t have colorful Japanese ones.)

PS, I have no adequate words for what is going wrong in our world today.  Note that technically, 2021 is really the first year of an upcoming decade.  May we learn and get things properly on track by then.  Meanwhile, cultivate loving-kindness.

The foodie me: Low/no gluten, low sugars, lots of ethnic variety of foods. Seafood, offal, veggies. Farmers' markets. Cooking from scratch, and largely local. The "future" me: I've now moved to my new home in rural western Massachusetts. I am raising chickens (for meat and for eggs) and planning for guinea fowl, Shetland sheep, and probably goats and/or alpaca. Possibly feeder pigs. Raising veggies and going solar.
View all posts by goatsandgreens →
This entry was posted in Breakfast, Cooking, Poultry and tagged breakfast, Chicken, Egg, Japanese, onion, oyakodon, Recipe, rice. Bookmark the permalink.

6 Responses to Breakfast in Japan: Oyakodon