Posted on January 18, 2019 by goatsandgreens

I bought a sous vide tool/implement/thingamajig last spring.  Mine is a Gourmia, but I was highly impressed by the Anova.  Then, Anova cost in excess of $120, while my gold-discontinued-color Gourmia set me back $70.  I don’t need or care for Internet Interface with my cooking gear.

The Joule, though they have a great app that you really should download for visualizing temps that items should cook to yield specific results, is ONLY accessible through your dang phone.  Sorry, that’s sometimes useless up here in western MA, where I get a twiddle of cell service ever so often, and where the satellite Internet often goes down in bad weather….  For this alone, I’d NEVER recommend a Joule.  Just their app, which if you look at it and plan in advance, you can get a great visual idea of what you can cook, temps and best times for best meals.  Anova will at least have the full courtesy of letting you decide if you want to use a phone to cook with, or just your own hands-on fingers on the device.

I’ve cooked several dishes sous vide.  It is wonderful for chicken breast.  Not so useful for beef steaks, although if your beef steak is thick, I could see it.  Haven’t had a thick steak lately, though.  It is tasty for salmon, but in that case, you could go either way… sous vide or cooktop.  Or,  yes, grill, which imparts some great flavor from the wood.   Just a lot less effort to simply fry salmon up in a skillet than using a sous vide.

In this endeavor, I opted to pre-sear the meat.  I think steaks, chops and fish are best post-seared, but I wanted this to come out more as braised, and wanted not to pat off the marinate that I was going to sous vide this pork in. 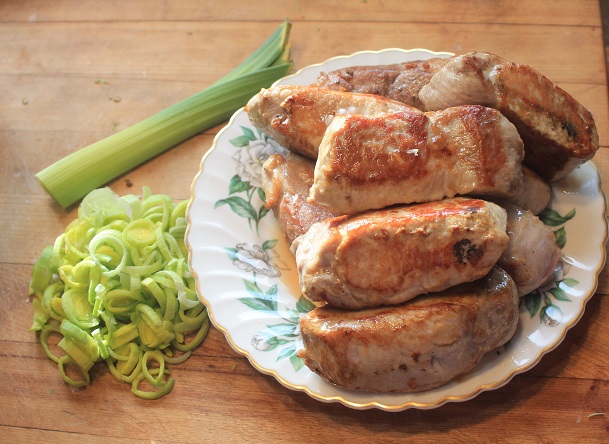 The pork has been pre-seared, and the leek slices are awaiting their brief stint in the skillet.

I am truly looking forward to cooking pork tenderloin via sous vide… so easy to overcook and render barely edible!  But in the interim, since I don’t tend to buy tenderloin, especially for just me… let’s look at “country style pork ribs”.  My favorite cut.  Better than bacon.  (I bought half a porker from a local farmer last summer — I could get any cuts I wanted, so my tenderloin portion was turned into chops…  Wasn’t thinking about the sous vide when I placed my order.)

After lightly sautéing the leek, mix in the tomato paste and seasonings.

I used bacon fat for my cooking oil, but that was merely because I had bacon for breakfast, and oh, well!  The high temperature version of avocado oil is my normal standby for cooking.

Set your sous vide tool to 156 F / C, in a water bath, following your implement’s instructions.

Brown your pork chops in a large skillet using your cooking oil of choice (either two skillets or do them divided), medium high heat.  About 3-4 minutes a side, including those edges.

Remove to a plate, let settle while you pan fry the leek.  Lightly brown this in the same pan, and then set aside into a small bowl.

Place the pieces of meat into a 1 gallon-sized sous vide or Ziploc style bag, in one layer.  Any juices on the plate they’ve been rested on should be added as well.

Add the basting/marinating material via a spoon, bringing in as much as possible, on top of the layer of meat.  Spread it around a little.

Seal the bag, either by using a vacuum seal implement, or by the Ziploc water displacement method.

Rub the package to disperse the included basting sauce… it won’t evenly disperse, but while cooking in the sous vide, it will go further around the meat this way.

Double bag.  If you have a specific sous vide bag, you may not need to double bag, but if you are using the Ziploc style method, OR if you feel sharp bones — double bag, and seal as described for the first bag.

Sous vide 9-14 hours.  Mine was so treated for 9.5 hours.  Check water levels occasionally, and add more as indicated by your sous vide tool instructions.  I do think that going out to 14 hours would engender a bit too much “mush” factor for my tastes, but yours may vary.

Let’s hang out over at Fiesta Friday.  We are prepping for a blizzard late this Saturday and into Sunday, and I’m so glad I don’t have to fight my way into work during or after.  Retirement is indeed what it is cracked up to be… especially with what’s coming.  At any rate, the hosts this week there are:  Ai @ Ai Made It For You and Jhuls @ The Not So Creative Cook.

And no, I’m still happy I’ve not moved to Florida.

The foodie me: Low/no gluten, low sugars, lots of ethnic variety of foods. Seafood, offal, veggies. Farmers' markets. Cooking from scratch, and largely local. The "future" me: I've now moved to my new home in rural western Massachusetts. I am raising chickens (for meat and for eggs) and planning for guinea fowl, Shetland sheep, and probably goats and/or alpaca. Possibly feeder pigs. Raising veggies and going solar.
View all posts by goatsandgreens →
This entry was posted in Cooking, Meats and tagged Gluten-Free, Leeks, Paleo, Pork, pre-seared, sous vide, Whole 30. Bookmark the permalink.