(The soy would be in the coriander chutney I used.  Other savory chutneys could be substituted, or you could make your own – something I plan to challenge myself with this coming autumn.) 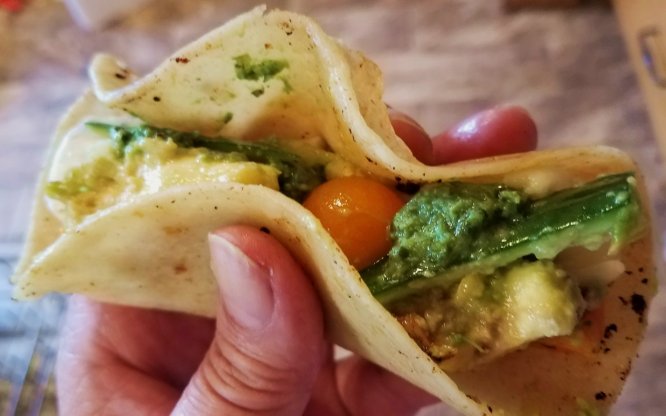 I’d planned something that would be more authentically Mexican, or even Tex-Mex, but here I am, just going through the fridge (and my garden) as well as my spice and seasonings rack to come up with this one.  Sometimes it is just fun to make wraps with both hot and cold ingredients.

Wednesday, I’d gone down to my old stomping grounds in Connecticut for my book club meeting – the second in-person one we’ve had since COVID – and I’d missed the first one due overbooking my life up here with newly-hatched chickens.   Alas, this book club is now going defunct and closing its proverbial doors – but I wanted to see people from it again!  A last send-off, as it were. 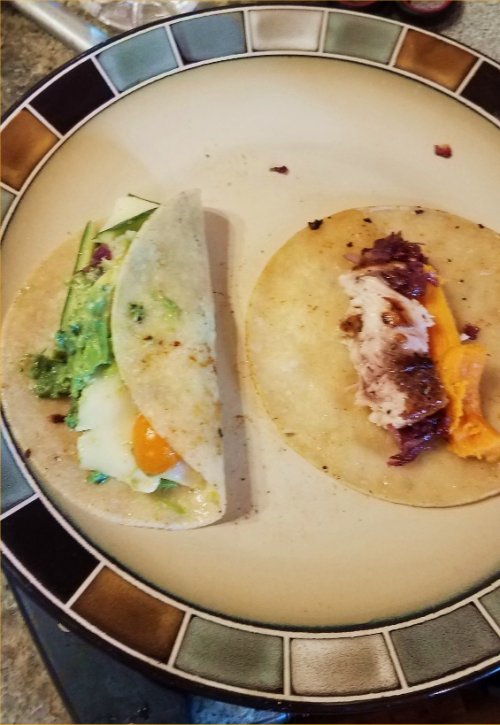 Well, since I was down there anyway, I dragged along a cooler, and stopped to pick up seafood at one of the better purveyors of seafood in the Danbury region.  (Here in the hinterlands of western Massachusetts the pickings can be slim.  Mostly up here you can find salmon, or you can find farmed shrimp.  Not much else.)  I also stopped at an Indian market, but that’s another meal or three…

Mahi-mahi (Coryphaena hippurus), aka “common dolphinfish” or “dorado”, is not remotely related to the mammal dolphin.  They typically hang out in the Gulf of Mexico, near Hawaii, and in the Indian Ocean, which makes them well-travelled tropical and subtropical oceanic fish.   The name mahi-mahi derives from the Hawaiian language. 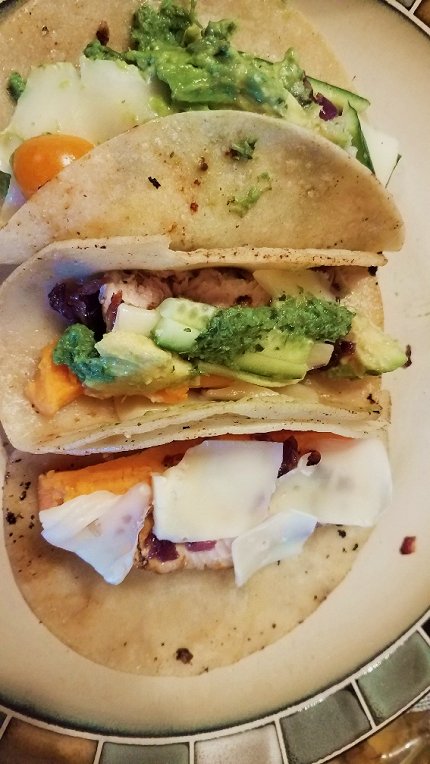 The garlic and the yellow cherry tomatoes came from my own garden.

I found that for this I don’t need to add salt.  I use ocean-going fish here (as well as cooking the onion and the fish in bacon fat) – which means I really don’t miss it.  And just about any cheese worth its salt (ahem) already provides some salt to a dish such as this one.

The coriander/cilantro chutney is a product of the Indian foods concern, Swad, and contains cilantro/coriander, serrano pepper, coconut, soybean oil, vinegar, cumin, ginger, sugar, garlic, citric acid, and a couple of emulsifiers.  I’m not a fan of the soybean oil, but it is good to know that it is there.

Forward into the recipe!

Prep Time:  30 minutes (some of which can be done while other parts cook).
Cook Time:  40-45 minutes.
Rest Time:  As little as practical.
Serves:  I wrote this for one person eating 3 small tortillas.  Depending on the sweet potato, you could get 2 – 6 servings out of one of those!
Cuisine:  Not really.
Leftovers:  Not really.

Note that for some of these, ie the sweet potato, you might not use all of it in filling the tortilla wraps.

Roast the garlic head in the oven at 375 for about half an hour. When it is done, put the head on a plate and push the “meat” out from the skins with a fork or spoon or tableware knife held on a non-sharp edge.  You can do the same with the soft part of the scape, if using.  Set aside.

Steam or boil the sweet potato until soft but not falling apart, about 20 minutes.  Test with the tines of a fork.  Remove skin, and slice into lengths.  Set aside, but keep warm.

Meanwhile, while the above cooks, cut everything else up.

In the skillet, add your oil or fat, and turn heat to medium.  Cook the onions until soft and just beginning to brown.  Remove to a paper towel to drain, then lay down the mahi-mahi to cook.  Grind fresh pepper atop, and drizzle with about half of a teaspoon of balsamic reduction.    Depending on both thickness and personal preference, cook for 3-6 minutes per side, adding some additional ground pepper to the newly exposed side.

Remove, and reduce heat to medium low.  Add the tortillas – in a large skillet you can probably do two at a time.  You want them to warm up but not to turn crispy (which would make them harder to work with).   Flip each one after about 1 minute or so, depending on the heat given off by your skillet.  Remove, and now it is time to add the ingredients:

Start loading the tortillas (one at a time) with a strip of the fish, a strip or two of the sweet potato, and about a third of the onion mixture.  Dollop in a bit of the garlic paste.

At this point I prefer to add some of the cheese.  Then atop that, I will add the other veggies, and then top with a bit of the cilantro chutney, all following the same line as you started with.  Fold.

Repeat the process three more times until you are done.  Serve yourself…  or if you are doing this for multiple adults, they might want to create their own.  This dish is best for informal eating.

Sharing this recipe with: 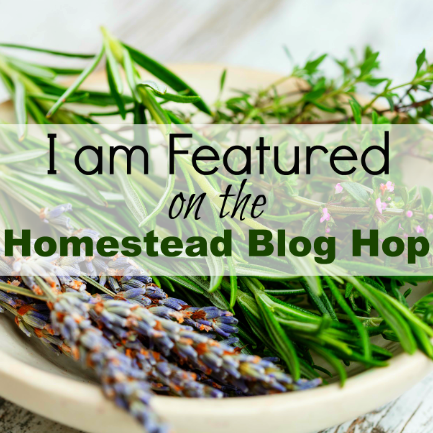