Posted on December 19, 2020 by goatsandgreens 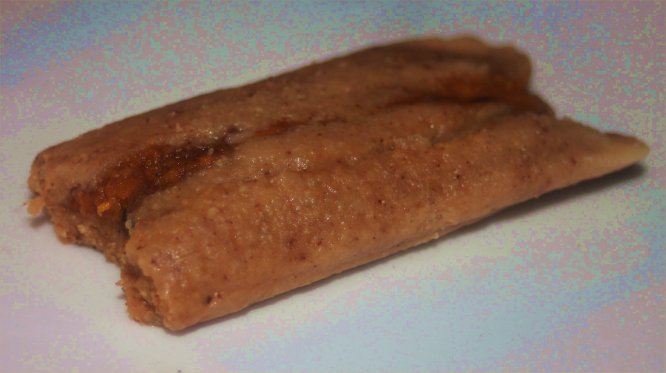 A solitary tamale. Vegan with black beans, squash, and a goodly amount of Arbol pepper.

A basic tamale is a traditional Mesoamerican dish, made of masa – a starchy corn dough, usually steamed in a corn husk. The corn husk can be used as the plate upon which this can be eaten after cooking. Ultimately, the word we use in English has been derived from the  Nahuatl language word, tamalli. (After passing through Spanish.) The Aztec, Maya, and earlier Olmeca, and Tolteca people all ate tamales – and it was a handy food to carry while on the “road”, travelling. (NOTE HERE: there were more peoples than just Aztecs in what is now current day Mexico when the Spaniards arrived – and  the latter eventually learned to eat tamales as well. These corn husk food pouches were just TOO convenient.)  When used as a food source when travelling, I doubt the tamales were ever re-heated.  They make good nutritious packets. 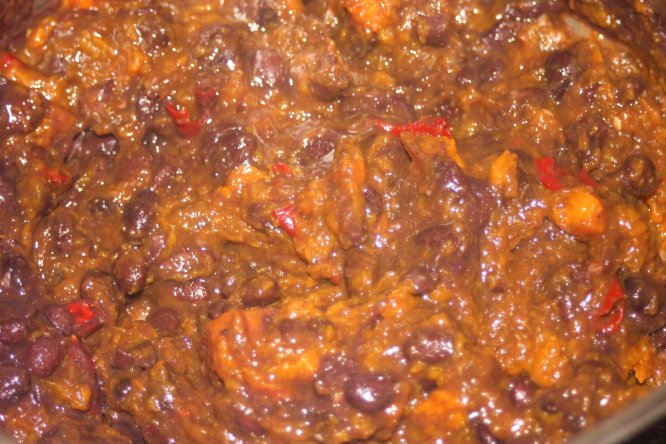 Oregano and cumin are not New World spices.  But, amazingly, allspice is.

Dairy is not an Old World product. So cheese is not an option for the recipes presented today – although turkey eggs could indeed be used. We will not be using eggs, in order to keep this dish vegan.  Added fats were not easily, if ever, used with pre-Columbian tamales, but I have made an exception here using avocado oil.  Avocadoes are New World fruits, but the indigenous peoples didn’t have means to extract that. 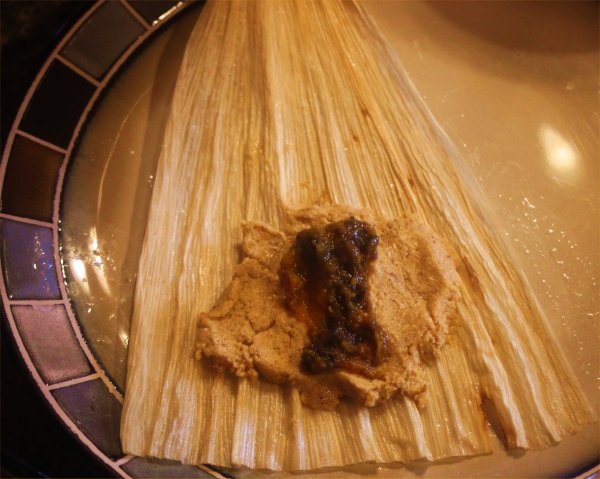 Admittedly WAY TOO LITTLE topping on this one. But this was the only serviceable photo. As you can see from the top photo here, I was doing much better by that tamale! Also, do spread the masa down thinner. Plenty of space here.  Since these tamales were relatively hot (spicy), the thicker layer of corn masa worked out fine in this recipe.

I decided to make these creations of the tamale recipes differently from each other. If you prefer the one type (vegan, or turkey) over the other, but want the other’s additional filling instead – go for it.  Mix ‘n match to your heart’s content!!!  (I also made a shrimp-based tamale, but it needs work in the upcoming New Year to make it ready for posting – couldn’t taste the shrimp at all!)

It is interesting to note that there were both savory and sweet tamales, and that both types persist to this day in Central and Mexican America. Up here in the Northeast US at least, I’d never heard of the sweet variants until researching for these posts. I’ may pursue that type in some future month. 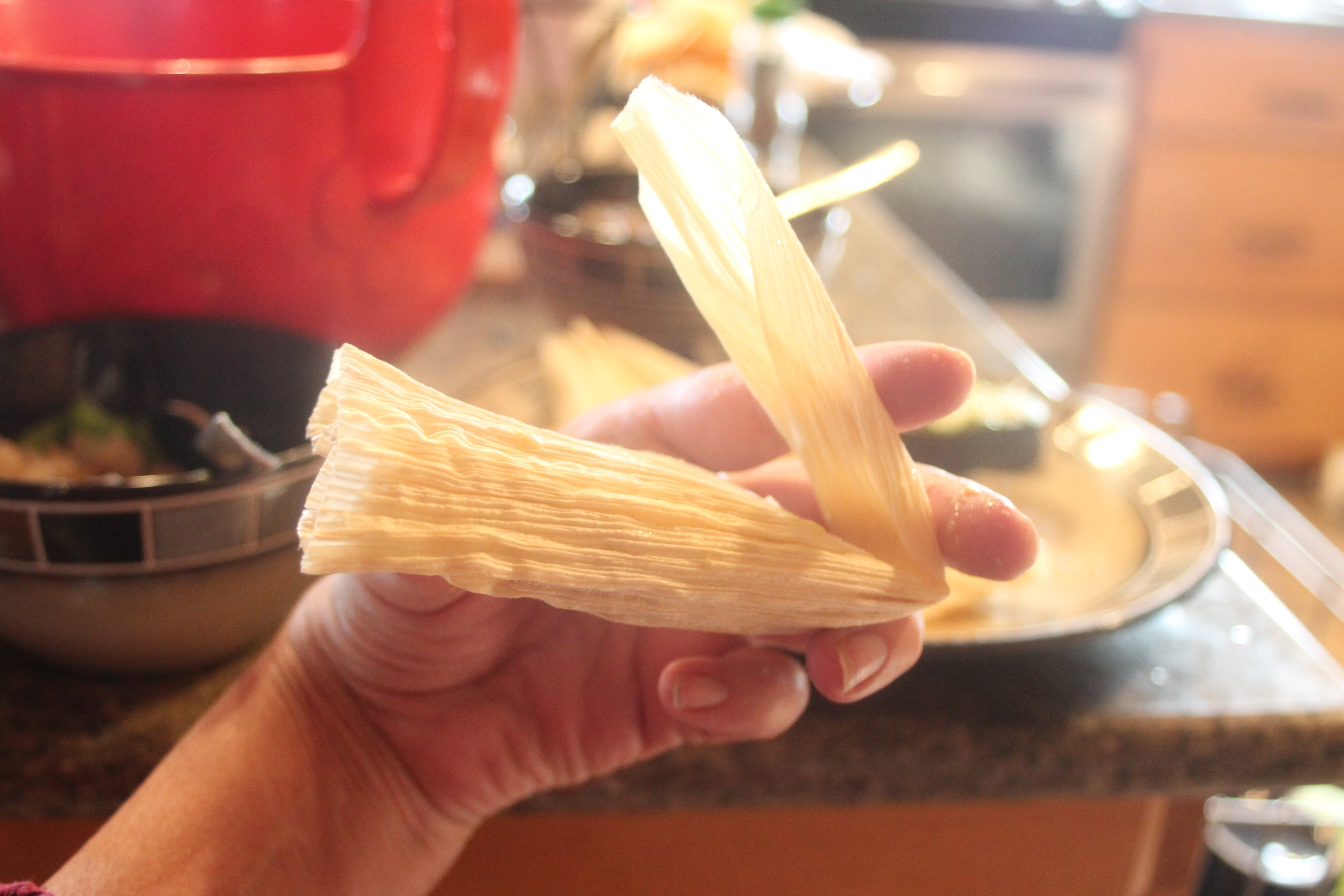 What is used to make tamales (and corn tortillas) is ground corn that had been soaked in calcium hydroxide [the alkaline (base) chemical lime a lot of us gardeners put on lawns as indicated, and not the (acidic) fruit].  This material is then dried and ground further as needed.  The procedure increases the nutritional benefits of the masa by adding calcium and by releasing bioavailable niacin.  Vitamin D3 will also be better absorbed by this process.  There is also a distinct flavor change in the process.  Since there weren’t many pre-Columbian biochemists back in the day, these benefits of the process were mainly used to improve digestibility of the corn flour, This process is called (these days) “nixtamalization”, although the term is derived from the Aztec.  (Nixtamalli or nextamalli in the Aztec Nahuatl language.)  Back in the day, this process often involved limestone rocks, in regions where such geography permitted.  .

“The spread of maize cultivation in the Americas was accompanied by the adoption of the nixtamalization process. Traditional and contemporary regional cuisines (including Maya cuisine, Aztec cuisine, and Mexican cuisine) included, and still include, foods based on nixtamalized maize.”  – Wikipedia.

A recipe resource I used for making these includes:  How to Make Authentic Tamales, as well as watching a variety of YouTube videos, and using/modifying the recipe found on the back of my package of Masa Harina to use only ingredients that would have hailed from the New World prior to 1492. 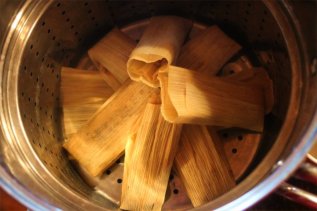 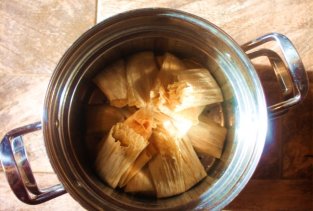 How to stack tamales in a steamer… open side up, folded side under.  You can use a corn-husk strand for a tie.  Don’t let the water beneath submerge them.  And, watch that the water doesn’t run dry.

What is really fun to know is that in Mexico these days tamales are very frequently made to be enjoyed over the Christmas season!  Happy Yuletide!

For the masa dough:

Rinse the dried corn husks, removing any dirt or “threads”.  Place them into a large bowl of room temperature to tepid water to soak.  (Alternatively, soak overnight.)

If desired, you can make the masa first, and then do the filling steps while the masa “rests”, as described below.   But it won’t hurt to have the filling made before (unless you are on a time crunch – which I was but the masa rest period happened to coincide with things I had to do outdoors; and that I was also attempting three styles of tamale filling in one day… )

Simmer the butternut squash in water to cover – bring first to a boil then reduce heat to simmer – allow to cook for 15-20 minutes or until squash is soft but not given to full mush.  Drain and set aside.

Take the desired amount of dried Arbol chilis, remove stems, discard seeds, and chop as indicated in the ingredients’ list.  Add to a pan, and add the black beans.  Mix, and then heat on medium until most of the liquid from the can of beans evaporates.  Add in the squash and all the seasonings, and blend coarsely (or smooth should you desire), on low heat, for 5-10 more minutes.  If the filling starts to dry too much, add a little water.  You want a thick filling, but not a fully dry one.

To make the masa dough:

Add the dry masa ingredients together in a bowl.  Stir to mix.

Add the wet ingredients.  Stir to mix.  You can roll this out if you desire, then return to the bowl, but I didn’t find this necessary.  If it is very dry, add a little water.  If it seems too wet, add more masa harina – but note that the mixture will become less wet in the resting stage, where the masa incorporates the liquids.

Allow to rest at room temperature for half an hour, covered with a damp towel.  (You can do some of the filling prep stages here if desired.)

Taste and adjust seasonings.  If you need more liquid now, add a bit more, and mix.

Do refer to the photos in the discussion section of this post.  Lay out each husk one at a time, and take a large heaping spoonful of dough (I didn’t measure), and place on the wide inner base of that husk.  Using your fingers, flatten this out.  Ideally form a rough rectangle, with the bottom of the dough about 0.75 – 1 inches from the bottom of the husk, and at least an inch away from the sides.   Stay below the halfway height mark of your corn husk.  (PS, if your masa dough is too dry, I think it will just simply want to fall off the husk if you hold it vertical – yes, I tried this because I demonstrated this on a Zoom culinary group a few of us intrepid foodie explorers belong to, and had to hold the dough up to the laptop.  I think too wet it will simply slide off!)

Add a strip of your filling down the center of the dough, leaving space especially on the sides for rolling the tamale together.

Take one hand and roll one side of the husk (say, the right, for description’s sake) towards the left.   When you can go no further, pull back on the husk a bit, lifting it away just slightly from the dough.  Then on the left, using the left hand, roll that portion over to the dough on the right.  Let both sides of the dough meet, and carefully wrap the dough so it connects, and then have one side or the other of the husk overlap the other. side (with the dough and filling safely inside).

It will probably take a few attempts to get this right.  It helps if you already have made sushi rolls, stuffed grapes, or summer rolls in your past – or even some types of dumpling.  Similar but not quite identical principles to hand (ahem) here.

Fold the top half of the tamale over the bottom, filled, half.  You can fasten with strands of husk from unused pieces of husk – nice little tie and all.  (I saw some recipes that used cotton twine).  Or if your husks cooperate – mostly, mine did – you don’t need to tie them at all.

Place into a steamer with about an inch of water at its base, but don’t add so much water that your tamales become inundated. Prop them up so they can have the open ends (the “bottoms” of the tamales when prepping) facing upwards, and especially if you don’t tie them, that the folded-down portions of husk are underneath (keeping gravity from opening them up).  You can use anything (non-toxic) at the very center of the steamer to build your tamales up from, for steaming.  I used some thin extra corn husks.  They’ll stack up, as depicted above.  Cover with some more extra husks, and bring to a simmer, covered, on your cooktop.

Cook for 45-55 minutes, checking to make sure the water at the bottom of the steamer does not fully evaporate – add more water down the far edges of the steamer, if you need to do so.  Pull out one (careful because of steam), open, and taste.  The corn should be reasonably solid and hold its shape with the filling inside.  If the masa is not solid enough – ie, it threatens to fall apart – return to the steamer and cook for another five or so minutes.

Serve as appetizers, or as the major part of a meal.   Unwrap – no,  the husks are inedible, but they do provide flavor while cooking.  You can provide a dipping sauce / salsa for them should you so choose.

Sources for the informational portion of this and the past recipe: 1) Wikipedia. (Yes, I know Wikipedia is only as accurate as the persons who’ve entered data… But I don’t see tamales as being a topic where someone would have a fraudulent bone to pick.)

Personal note:  I made the three types of tamales on the same date (turkey, vegan, and shellfish).  Which meant I steamed them all together.  This is why there are some overlapping photos.  BUT:  Do NOT steam vegetarian/vegan tamales with tamales that are not vegan or vegetarian if you plan to serve these to true vegans or vegetarians.  Also, do NOT steam shrimp or shellfish ones together with tamales also intended for people who are allergic to shellfish.  PLEASE!!!

This recipe is being shared with Fiesta Friday (co-host Jhuls@The Not So Creative Cook),  Farm Fresh Tuesdays,  What’s for Dinner-Sunday Link-Up,