Posted on September 17, 2019 by goatsandgreens

(oh, with notes on the purslane, basil and delicata squash growing here as well.)

Alas, I got my potatoes in the ground late this year – the raised beds weren’t ready until late June.  At any rate, yes this late in the season (at least in the Northern Hemisphere) for a post about planting outdoor vegetables, but I’m starting the harvest now, and one is welcome to bookmark this post for next year.  (I’ll re-link it in spring…  but if you live and garden in the Southern Hemisphere, here you go!) 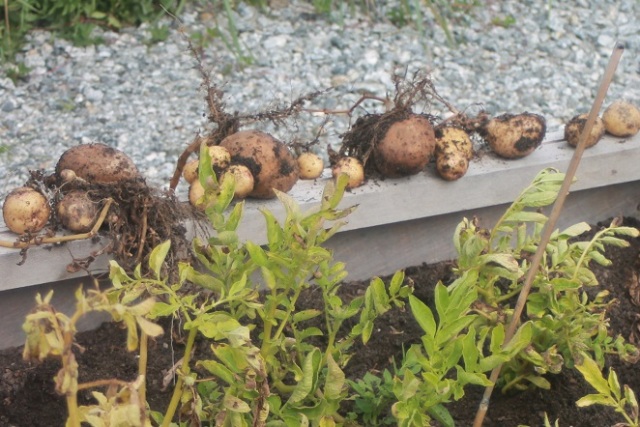 As I am really only a fan of the gold potatoes (Yukon being the most prevalent strain around here, although I’ve also tasted and liked the Carolina gold), that’s the only type I planned on planting  – and possibly the only type I ever will.  Their rich and creamy taste and texture draw me to them, and they are really useful for just about any potato purpose you can think of.  One advantage I personally find is that Yukons don’t need a surfeit of salt.  They have enough intrinsic flavor that they stand well enough with only a minmum of that seasoning.

The only place where I find Russets to be better is in making French or steak fries – something I don’t really have a call to cook very often.  Let’s face it… not the healthiest thing one can cook using potatoes to begin with.  I’m content to save those steak fries for occasional dinners out.    The only time I cooked them at home is when a farmers’ market vendor simply handed me some, gratis.  (.See my Steak Fries recipe here.)  This is a place where Russets will hold together properly for the cooking procedure.

The harvest. Yes, it turns out they’re not all golds, or maybe there’s a different gold of a non-Yukon stripe that looks like that.

One thing about potatoes – if you ever go to (or read up about, in my case) Peru, you’ll learn that this seat of potatoes has perhaps a hundred varieties of the spud.  If some of the other variants come up here to Massachusetts or nearby, I’d consider tasting and perhaps growing some of those.

At any rate, here are a few potato recipes I’ve made using the Yukon (or other) gold potato variety:

Mashed Potatoes:  The surprise secret ingredient is a pinch or so of ground nutmeg.  I have to credit Karl H. for this awesome idea. I have done this without fail for the past 25 years based on his influence.  (It even makes Russets sparkle.)

Scalloped Potatoes au Gratin with Onions and Cabbage:  While this version is vegetarian, I’ve also made this with a bit of bacon.  Remains in either case a standard in this house.

Colcannon:  An Irish dish made with potatoes, leeks, and cabbage.

Irish Shepherd’s Pie:  Use lamb.  (Otherwise, it is “cottage pie”.  Although I could give  a go-ahead to “cowboy pie” as a name.)   I adore this recipe.

I have also added Yukon golds to Indian curries, where they meld in nicely.  And yes, you can use any variety you truly like to make any of these dishes.  I simply have a strong bias.

Doesn’t matter what variety you grow, they all appear to require the same things.  I obtained my seed potatoes from two sources:  the first were potatoes I let live in my root cellar all winter and spring long, but which developed roots before I could cook them.  Which was fine by me.  These got planted outside.  The second batch were bought from a nearby mom and pop “Tractor Supply-like” store.  I did intermingle them when planting.

If they were large, I cut them in half or thirds, and made sure some seed roots were beginning to develop on the parts of the potato I intended to plant.  I planted in rows, each potato “seed” at least 8 inches from its neighbor.  You can plant them closer should you desire – potatoes are fine clumping – but as I didn’t do much “hilling”, I figured some distance was fine.  I put each potato bit about 4 or 5 inches deep into the soil.

Hilling:  Mound up soil around the potato plantings, and increase the amount of soil as the season progresses.  This is why those “potato baskets” work.  I have done them in the past.  You keep adding more soil as the potatoes develop – you really don’t want the potato tubers to turn green, which they will do if the tubers start developing above soil surface.  GREEN means they are producing solanine (potato plants are in the nightshade group – the green bits are potentially poisonous).

Gentle flowers on the Yukons.

The above ground greens will produce nice and pretty little flowers After these die off, eventually the greens will begin to do so as well.  The potatoes below the soil will not grow much once the greens die, so go pull them then.  I simply used a garden spatula, but if you are big time at this a potato fork (resembles a regular pitchfork) can become more efficient.

The patch I’ve pulled up so far is about 1/5th of my crop.  I’m hoping to get some of these “new potatoes” to develop further into larger ones prior to their full leafy die-off.

I’m focusing on pulling out the more dead plants first. I figure I can give the rest two or three more weeks to develop.

I am storing these in the root cellar, but any cool dark place will do. They like a little level of moisture to prolong their life best.

I did find one of the above large potatoes to be partially “wet”. You want to eat the good parts of it first, and not store it with the rest. Otherwise you can cause the whole batch to go bad. Which, um, none of us wants!

Early on, the Paleo movement put potatoes in the exclusionary list.  Potatoes have since been determined to be healthy, and they’re now off that list.  Obviously tater tots and fries (chips in the British Commonwealth) aren’t particularly healthy.  You do have to consider moderation, as they have a high glycemic index – and so people with sugar problems and diabetes should moderate and eat sparingly.   Until I discovered Yukon golds, I was happy to eat them hardly at all – most varieties taste like cardboard to me unless dosed with severe quantities of sodium chloride (table salt).  Which is STILL how I eat fries/chips from the Russet background.  Indeed, by most chef standards (from what I’ve watched on YouTube), I under-salt most foods!  BUT, potatoes do have nutritional pluses, especially with the skin left on.  With a good-tasting variety of tater, I find I don’t feel called to do that excess salt thang!   So, read and use, or ignore, the below, as you choose:

Fiber:  They’re not as high as with other plant sources, but they do help.  Leave them skins on, no matter the variety.

Flavonoids and carotenoids:  According to Livestrong, purple Vikings, Yukon golds, ruby crescent potatoes provide the best quantity of those substances.   It’s because of the color, and there may well be truth in this.

Complex carbohydrates:  Being complex – hey, yes, a definite benefit. I am still looking for the source, but I’ve read that twice-baked (cooked) potatoes are healthier than the first time round.  Apparently this modifies the source starches.  OH, yes, here we are:  “Cooling potatoes after cooking may lessing their effect of on blood sugar and lower their GI [Glycemic Index] by 25-26%” reported by Healthline with a couple of source links.  The indication here is also NOT to subject your potatoes to extremely high heat.  Potatoes are also considered to give people a “more filling” ratio, which may mean you might eat less in the way of calorie or total intake, should you be desiring of weight loss. Obviously dependent on recipe…

Resistant starch:  Check here at Healthline for interesting health bennies, and source links.  Note that most benefits accrue if the skin is left on.  (Obviously remove any bad parts…)  This checkpoint feeds into the previous comment, too.

Lutein:  Something indicated for eye health.  (My eyes are getting old, I can surely appreciate this!)  Apparently strongest in potatoes with yellow flesh! That would include any of the Gold varieties!

OTHER NEWS FROM THE RAISED BEDS: 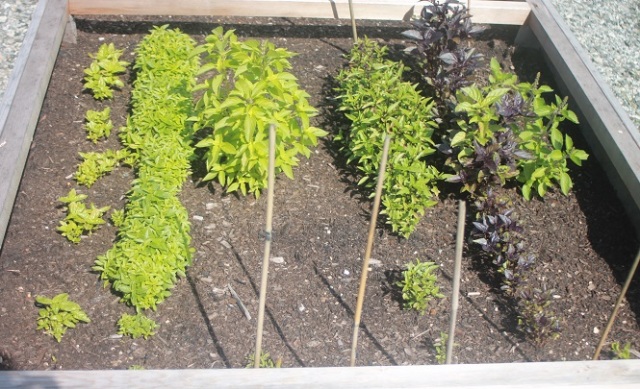 A selection of six types of basil. Will be thinning this week. And maybe cooking French, Thai or Vietnamese, if I get the chance.

Other crops this fall are purslane, which is doing quite fine.  As is my basil.  Alas, the bok choy vanished.

Purslane, usually regarded as a weed, apparently has mega health benefits. Remember the definition of a weed: “Any plant growing where you do not WANT it.”

Close up of purslane with what I think is a bee, possibly a native bee – although there’s nothing for her to enjoy. Maybe she’s just resting.

The pumpkin vanished, but the delicata squash is doing well,  and there are some flowers.  I will have to provide a row cover later in the season so they can mature when cold weather comes (like most of the things here they were planted late. 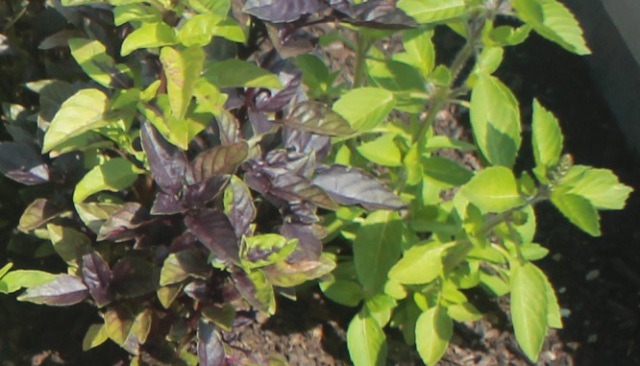 Purple basil and holy (tulsi) basil. Tulsi is supposed to have many healing properties.

The peppers and the cherry tomatoes have given me some tasty bites and more.  Also, I have some seeds for winter grains that I will be planting later this week.  More on that when it happens.  Or, check the Journal 2019 tab.

This post is happy to visit Farm Fresh Tuesdays, a wonderful homesteading blog.  As is Homestead Blog Hop, which it is also visiting.
And it is having a grand time fiesta-ing at Fiesta Friday, co-host Antonia @ Zoale.com.
And has had several excellent full plates at Full Plate Thursday.