Posted on July 5, 2019 by goatsandgreens

I lucked into a package of turkey hearts, and since heart is my favorite organ/offal thing going, I simply had to purchase. (Okay, some days it’s tongue… also a muscle… not gonna lie…)  Oh, you could use turkey thigh – chop and go forward.

Don’t let heart put you off.  Heart is a muscle, not a gland.  It’s a hard-working muscle, beating and beating and beating throughout the life of the animal.  It doesn’t take a rest, ever – well, not until it ceases beating forever.  So… It should be cooked with respect.

Since it works hard, it is tougher than many other muscles.  And the meat itself is lean (despite a casing of fat that may appear around the outside parts of it).  But it also really pinpoints and contains the flavor of the animal from which it is obtained.

I’ve posted about cooking chicken hearts a couple different ways, but those are smaller.  They cook through rather immediately.  I wouldn’t consider sous vide for them.

Turkey hearts – one could boil or braise them in plenty of liquid – I’d opt for the latter.  Or, one could opt to test out sous vide on them.  Turkey, like chicken, should never be served “pink”, and one does not want to rubberize or toughen something that is probably easy to rubberize.  Oh, and you don’t need to sear this “cut”.

If I don’t keep the thick broccoli stem/base, I coarsely chop it and present it to the chickens…  Otherwise, it is really good to eat. 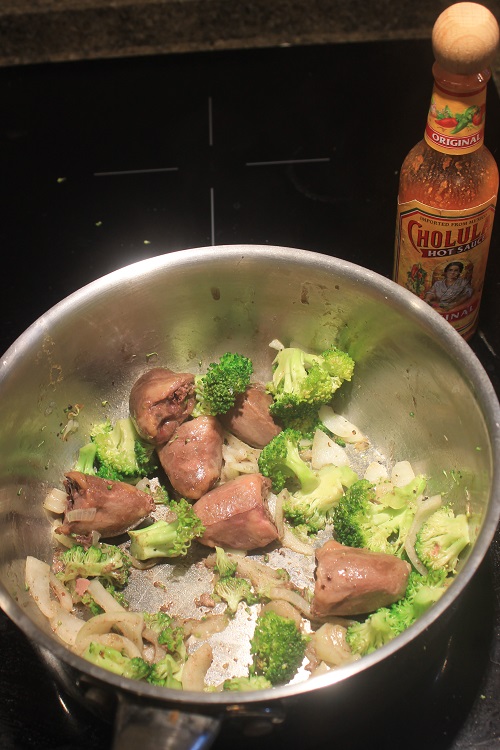 I did sous vide all 17 hearts at the same time because it was “cook ’em or lose ’em” time. Since there was only one of me, and I was going to be unavailable to eat the rest immediately, I simply made this a single serving (1/3rd of the other ingredients), but wanted to write it up for the whole package of hearts. Presumably you’ll be sharing, right?

I’ve obtained re-usable silicon zip lock bags for my sous vide adventures.  No Bisphenol A, and no “toss it out into the oceans” or wherever the plastic waste product ends up.  They’re a bit annoying to clean but it’s do-able.

So, today:  we bring you sous vide turkey hearts!

Sous vide those turkey hearts.  I simply made sure they lay as a single layer in their bag.  Reusable silicon is recommended.  I didn’t add anything else to the bag, but I did leave the fat caps on the hearts.  Seal by immersion, or by vacuum (if using plastic).

Shortly before the hearts are done, prep everything else.

Sauté the onion in butter on medium heat, until the onion gets soft, then add the broccoli, tamari, au jus sauce from the finished turkey heart package, tarragon, salt and pepper.  Cook another five or so minutes, or until the broccoli reaches your preferred texture, mixing regularly.

Add the still-hot hearts and any hot sauce, stir a minute or two, plate and serve.

For this, you’ll want to take two cooked (via sous vide) turkey hearts, chop them up, with whatever ingredients you like, and make breakfast.  I used three eggs, but two eggs in a smaller skillet will work just as well.

Getting my hearty omelet together!

We’ll assume you’ve already sous vide-d your turkey hearts via the first part of the recipe above.

An Aside:  Turkey Heart Omelet

Assemble your omelet as usual – I do cook the bok choy and mushroom a bit before adding to the beaten eggs nestled into the skillet.

PS:  I fully meant to make a savory apple dish LAST Friday for the Fourth (American as Apple Pie), but I’ve been busy getting the previous home in order for sale.  It will appear later this month, once I make it again – did a simplified version but not yet ready for Prime Time…

The foodie me: Low/no gluten, low sugars, lots of ethnic variety of foods. Seafood, offal, veggies. Farmers' markets. Cooking from scratch, and largely local. The "future" me: I've now moved to my new home in rural western Massachusetts. I am raising chickens (for meat and for eggs) and planning for guinea fowl, Shetland sheep, and probably goats and/or alpaca. Possibly feeder pigs. Raising veggies and going solar.
View all posts by goatsandgreens →
This entry was posted in Cooking, Offal, Poultry and tagged broccoli, Poultry, Recipe, sous vide, turkey hearts. Bookmark the permalink.

10 Responses to Sous Vide Turkey Hearts, with Broccoli and Onion