Posted on February 2, 2019 by goatsandgreens

The recipe I’d originally planned to make for the Asian New Year (of which celebration starts this year on February 5th, my late Dad’s birthday), was an epic fail.  Oh, it tasted fine, and I’d copied the critical part (the dumpling skin part) exactly, but it didn’t hold together.   At All.  Slimy mush.

So, back to the drawing board for another time.  But… as I love cuisine hailing from that vast continent, I wanted to have a post up in time for this festive Chinese and east Asian/southeast Asian holiday.

I figured I’d stick with something Vietnamese (the failed recipe was Vietnamese), but time to go simpler.  And there was already watercress in the fridge.

This one comes from my cookbook, Lemongrass, Ginger and Mint:  Vietnamese Cookbook, by Linh Nguyen.  The book aims to provide “classic Vietnamese restaurant favorites at home”.  I’ve only been to three Vietnamese restaurants in my life, so I can’t really answer that.  The watercress ended up in the Vietnamese diet during the years of French colonization.

Changes I made:  Sirloin tip steak instead of ribeye.  The former was already thawed, and needed to be eaten.  Sure, I could also thaw out the ribeye, too, but that would mean too much beef to eat in under a week’s time.  Beef should be parsed out slowly in the diet for a variety of reasons.

Here, we just need the dressing (and, to toss the greens and meat).

And, they call for “one bunch watercress” – I don’t know about you, but I’ve yet to see a standard measurement for a unit of weight called a “bunch”.  I do know it means be flexible, and my recipe below reflects on that, but… I do provide an approximate weight here.

Watercress adds a nice peppery crispness to this dish.  To let this last longer in the fridge, place any rooted watercress you may have, into a shallow bowl of water.

Finally, I cut the recipe in half, to serve just me.

The salad dressing, a serving. Add when done.

Part I:  The Fish Sauce Dressing (Nước Mắm Trộn Gỏi/Nộm):  (which you can use on anything you like…)

Use, or store.  (Up the concentrations of these if you want to reserve some for future recipes, not just to make a one-shot of the salad below).

For those who cannot eat fish, use a quality tamari or use coconut aminos instead.  Coconut aminos are sweet, so cut down on the sugar in the recipe, perhaps by half (taste).

The author of the recipe recommends that for saving the dressing for a lengthy period (which can be up to a month), simply to make a batch of the first three ingredients, adding in the garlic and hot chile when about to use, in appropriate concentrations, as the garlic and chili may lose flavor over time.

Part II:  The Salad Itself:

Combine all the above except one tablespoon of the sesame oil, the watercress, bok choy and fish sauce dressing in a bowl.  I let this marinate for 20 minutes, although the recipe did not discuss marinating.

On a platter or in a bowl, cut the watercress into 3-4 inch / 7-10 cm segments, and chop up the optional bok choy.  Add about half of the fish sauce dressing, and toss.

Heat up a small skillet on medium high.  Add that last tablespoon of sesame oil, spread it, and immediately drop in the contents of the beef bowl.  Stir, browning the meat, for 2-3 minutes.

Remove the contents of this skillet and place atop the greens, add the rest of the dressing, toss and serve!

I served with rice, waiting until my rice cooker rice was nearly ready before searing the steak. 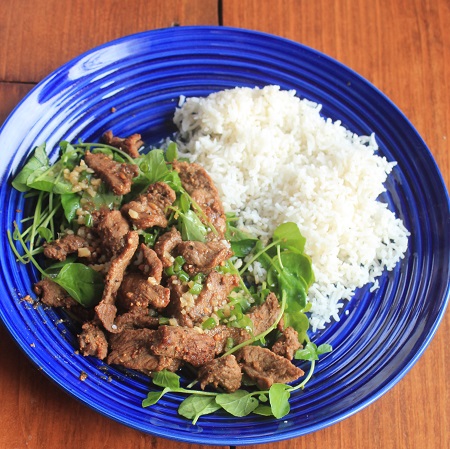 Ready to eat, except this still needs the beef to be tossed with the underlying watercress, and the overlaying dressing.

Thoughts about this cookbook:  Lemongrass, Ginger and Mint, by Linh Nguyen: 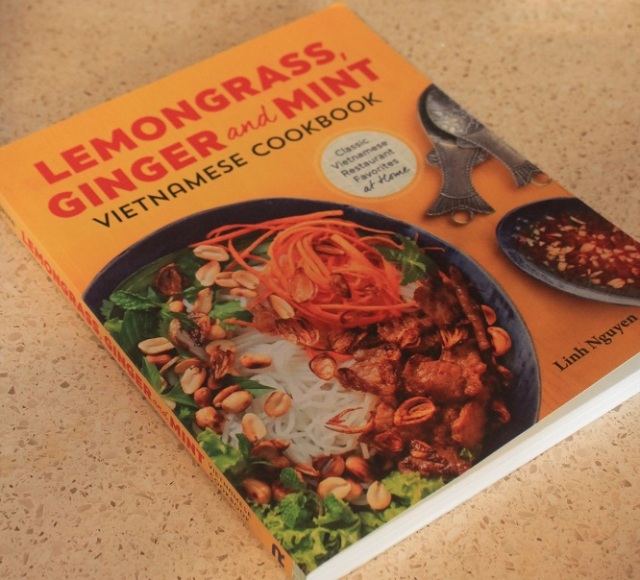 For a cookbook published in 2017, there are startlingly few photos of the meals.  However, there are a lot of intriguing meals to be had here, including the signature pho dishes.  If ingredients are hard to find, Nguyen makes these with those ingredients, but lists substitutes and how to use, if and as needed.  Many of the recipes are simple (as is the one I’m posting today), others are much more complex and nuanced.  But there are plenty of simple recipes, and a variety of tingling taste sensations to be had here.  The book totals 75 recipes, but the variety makes it seems like there are more.  Instructions are clear.  Unfortunately, Nguyen does not provide a recipe for the one I failed at and am not yet including on my blog…

There’s a good section on ingredients to stock in your pantry, cooking equipment, and also a short discussion on the differences between north, central and south Vietnamese cuisine.

I am looking forward to trying several of the rice vermicelli recipes, as well as the Vietnamese crepes.  Also, char siu pork.  I have another Vietnamese cookbook dedicated mostly to pho, and will sample one of those pho recipes first.  There are several bánh mì recipes in this book, but I’ll admit, bready baguettes are just simply not my thing.

For those who celebrate:  Happy New Year!

This recipe has made its way to Fiesta Friday, where it is happy to join in the Fiesta.  Co-hosting this round are Antonia @ Zoale.com and Julianna @ Foodie on Board.

And, yes, let’s provide some good eats over at the Homestead Blog Hop, too.