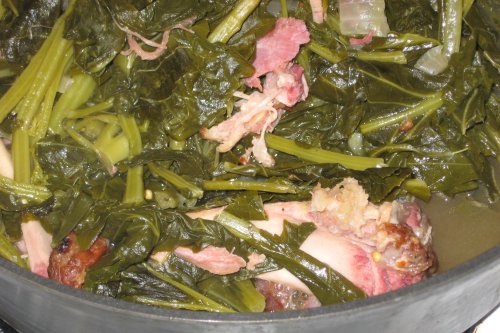 The photos here of this dish cooking or being served here are from my original posting at this blog, back early June 2011.  I thought about directly re-blogging it, as a contribution to Juneteenth, which is Friday the 19th, but I wanted reformatting and different commentary, especially deleting as to how I purchased ingredients back then, which was tedious and not pertinent to anyone not living near me then.  Plus a couple of nuances and minor changes have been added to the recipe description since then.  I make this dish reasonably often.  So… consider it a new recipe contribution from the same source?

Note:  if you don’t eat pork for religious or other reasons – you can always substitute in a smoked turkey leg.  I don’t like that version nearly as much, but I have made it, and it is still good.

I was born in Louisville, Kentucky, but other than the wondrous veggie known as okra, I wasn’t particularly raised on Southern cooking.  As soon as my parents discovered that crispy veggies were good, mushy veggies were all over and out the door, except when we cooked spinach.  (Crispy spinach???   Nah!)  And I admit, I much prefer crispy, vitamin-rich vegetables myself – but of course, it will depend on the kind.  I didn’t grow up with collards, grits or black eyed peas at my parental home, although I loved my Grandmother’s cheese grits casserole:  she cooked it up as a nighttime dish with cheese, and it remains a great memory when we went to Kentucky to visit.  (But Dad hated it, along with oatmeal, so we never had it at home.)  At any rate, collards cook a long time and the final texture, despite soft and not crispy, isn’t something I’d describe as “mushy”. 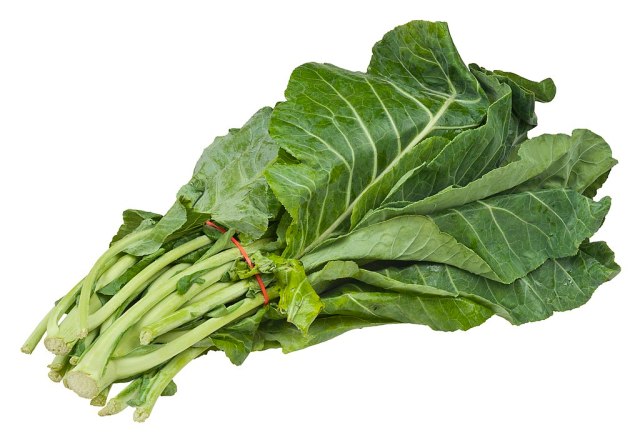 A bundle of collard greens, via Wikipedia. By Evan-Amos – Own work, Public Domain, https://commons.wikimedia.org/w/index.php?curid=16918371

This particular dish, however, is rooted in the poverty of 19th century (and earlier) slave plantation cooking.  The enslaved got the less desirable parts of pigs and cattle, and from that, this tasty dish was created out of need.  Hocks, after all, are not steak or tenderloin.  But they are dang good in their own right, and learning how to make a tasty meal from rejected meats is essential anywhere where meat (or other ingredients) may well be in short supply.  Or, where “waste not, want not” is a good principle to follow.

I discovered Collards and Ham Hocks when I went to a wedding shower at a black co-worker’s sister’s home some years back. Circa 1990.

This sister of the bride-to-be had cooked all the foods.  I found myself going back once, twice, possibly thrice, for additional helpings on her collard greens.  Nothing else entranced me as much as this.  I’d never even heard of this vegetable called “collard greens” before this night.  It was a discovery, this vegetable and its preparation.  A slightly acidic taste, a bit of heat, small fragments of fragrant meat, and lots of these long-simmered greens.

I’m a quiet sort of person (which my friend’s sister would not have known, since that was the only time I ever met her), but she kept looking at me in amazement of some sort, when I inquired after the recipe more than once, entirely serious.  She gave it to me, verbally, and I kept it to heart.  (In retrospect, this probably made me something of a PITA…  But back in that day, accessing recipes on line wasn’t much of an available thing…)

And, just where are those elusive hocks? Oh yeah, right there. Four per pig. By Rainer Zenz, CC BY-SA 3.0, https://commons.wikimedia.org/w/index.php?curid=1122441 – minor edit for enhanced color.

Anyhow, once I discovered this poor-country Southern and black-rooted dish, I was hooked.  Still am.  I cook it whenever I can obtain those hocks and these greens.  And the greens should definitely outnumber the meat in this savory dish.

Brown the ham hock up to two minutes a side on moderate heat.

Throw everything except the red pepper flakes / hot sauce into the pot.

Bring to a boil, then reduce to a simmer and cover.

Simmer for 1.5 – 2 hours, until the meat begins falling off the bone.  Add the red pepper flakes (or hot sauce) and simmer another fifteen or so minutes.  Do make sure your dish isn’t running short of liquid — add more water as necessary.

When cool enough to handle, simply shred up the meat, pulling it all off the bone, the latter of which you will discard.  Mix all of this together, drain off any excess liquid, and serve.   Will make 3-4 servings as a main course.  And, I always make it as a main course.

These days, I’d serve with a side of roasted or mashed sweet potatoes or yams.