Posted on September 28, 2018 by goatsandgreens

Remember the Leg of Lamb Mechoui?   There was so much luscious leftover au jus from that, that I saved it in a bowl, placed it in the refrigerator, and easily skimmed off the small layer of fat the next morning.

I obtained about 2 cups worth of nicely gelatinized au jus, that I decided to make it into a soup.  Looking through the fridge, I found I had Brussels sprouts that would do nicely with it.

I don’t really care for the sprouts just being boiled, but they do wonderfully roasted, and then put into a liquid base (such as a soup).  This would mean I wouldn’t have to cook the broth very long, either.

Onions are a staple in this house, so I also roasted some onion with the Brussels sprouts.  Since the juices still had a ras al hanout atmosphere to them, I didn’t focus much on additional seasonings.

The Brussels & onion has been chopped. I roasted both of these with a little avocado oil, then only used half of what I roasted in the soup, as I feared the whole batch could reasonably be “overkill”. (The leftovers will end up in an omelet on a future day.)

If one desires, one can also add bits of leftover lamb into this soup – I ended up finding other uses for those, so this broth stood on its own with the vegetables.  One could also add slivers of red or orange bell pepper for a colorful atmosphere, possibly using less of the other veggies if you do so. 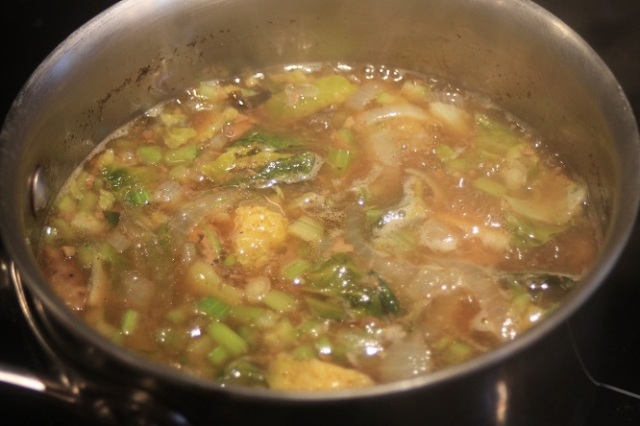 Because of the gelatin, and the local-farm-raised-pastured properties, and the cruciferous Brussels, this is a very nutritious soup, and would be warming on a cold autumnal day.  Which here in New England, are coming…

Note:  I thought I was going to use twice as much Brussels sprouts and onions than I actually added, after roasting, to the soup.  So the photos aren’t adjusted, but my recipe has been adjusted.  (The extra veggies got eaten later…)

A portion of the soup. As usual, I prefer Chinese soup spoons to Western ones.  Go ahead and add fresh parsley as a garnish when done – I shoulda!

Roast the prepared Brussels sprouts and onion and cooking oil (mix together first) in a pre-heated oven for 20 minutes.

When that is almost ready, heat up the broth and celery together, on high, on the cooktop in a suitable pan.

Pull out the sprouts and onion from the oven.

When the gelatin of the soup has liquified, and is warm, add the sprouts and onion to the soup.

Bring to a boil and immediately reduce to a simmer.

Cook for about 5 more minutes.

Remove from heat, and serve — you can garnish with fresh parsley after you ladle this out.

Shared with the wonderful folk at Fiesta Friday, this time hosted by Catherine @ Kunstkitchen’s Blog and Becky @ Bubbly Bee, so pop on over and visit.

And shared with the equally wonderful folk at the Homestead Blog Hop.

And, yes, over at the equally fine folk at the What’s For Dinner, Sunday Link Up locale!

The foodie me: Low/no gluten, low sugars, lots of ethnic variety of foods. Seafood, offal, veggies. Farmers' markets. Cooking from scratch, and largely local. The "future" me: I've now moved to my new home in rural western Massachusetts. I am raising chickens (for meat and for eggs) and planning for guinea fowl, Shetland sheep, and probably goats and/or alpaca. Possibly feeder pigs. Raising veggies and going solar.
View all posts by goatsandgreens →
This entry was posted in Cooking, Meats, Soups & Stews and tagged Brussels Sprouts, lamb broth, lamb soup, Recipe. Bookmark the permalink.