(I do provide gluten-free alternatives below.)  PS, I inadvertently posted something not yet ready for prime time…. So this is today’s post, instead.  Apologies!

Farro is a type of wheat derived from Emmer wheat, an ancient type of wheat that is naturally low in gluten, and contains a level of healthy proteins our standard wheat we raise in the Western hemisphere does not begin to match.  Farro has a “nutty” flavor, since it isn’t milled down.

I have a few thoughts and theories about gluten – obviously, if you have Celiacs, avoid it completely.  For those who are not, there are differing levels of gluten sensitivity, and there appear to be other triggers in standard wheat besides or in addition to gluten.  Plus, a lot of the wheat eaten is in the form of supermarket loaves or buns — just check the ingredient list on the package the next time you buy!!  And indeed, what passes as healthier “whole wheat” often isn’t… just being brown doesn’t make your grains healthy.  Or better on the glycemic scale.  I’m rather thinking that a lot (not all) of the bad reaction to wheats can be laid to the feet of some of these other ingredients.

If you eat bread, you are best off making your own or going to a dedicated reputable bakery.

In any case, farro is pretty good, even Davies, the author of Wheat Belly, who gets a little crazy on the topic, indicates he won’t dismiss Emmer wheat.

By the way, to clear something up, there is no such thing as GMO wheat.  There’s a company whose name I won’t mention, who when they proposed it, the idea was shot down by the larger grain farmers – so much of our wheat in the US is exported to countries who won’t buy GMO, that it just wasn’t going to fly economically.  No, wheat has been modified by the longer, more standard and traditional methods – going for yield per acre without much thought on nutrition per serving.

Some people will peel the squid so it has a pure white hue, but I like the purple just as much . There’s no taste or textural difference, just a matter of aesthetic preference.

The squid:  When I came upon this squid, which still has its ink, I just had to plot out another stuffed squid recipe.  I figured the ink would be best absorbed into a grain, and I’m not particularly fond of stuffing rice into things (other than sushi rolls).  If you can’t find farro (try health food stores or Whole Wallet), or you can’t/don’t eat gluten, then go with the rice.  Or… quinoa! 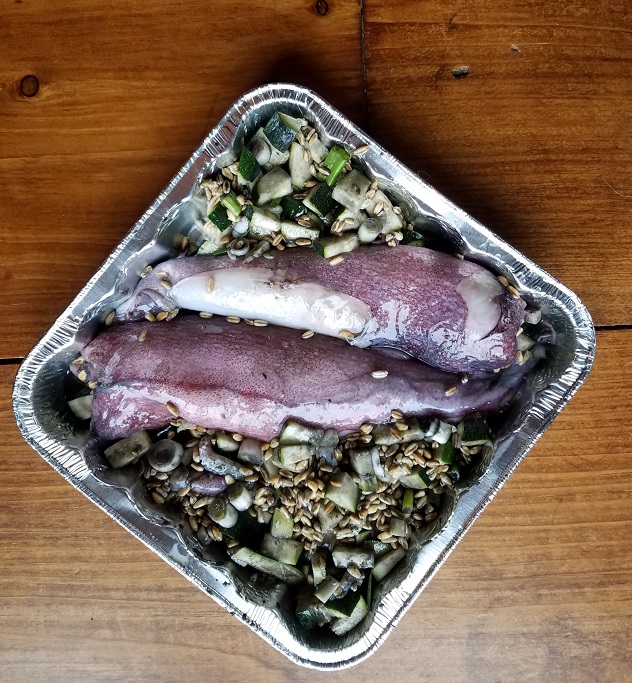 The extra stuffing happily surrounds the squid. It is now ready to be cooked.

The zucchini, or as they say in many parts of the world, the courgette:  I used this because it was in my fridge.  If you prefer a different, somewhat moist veggie, go for it.

Squid Stuffed with Farro and Zucchini

Soak the farro for half an hour in hot water to cover, stir once or twice.  Hot tap water is fine.

Meanwhile, clean your squid… reserve as much of the ink as you can.  (My bag leaked, I lost some, but!)  Basically, follow the instructions on one of my earlier posts, set the tentacles aside (they can remain inky) then wash the big tubes.  Cut off the fins, and put them with the tentacles.  Dice up the veggies, the tentacles and fins, place in a bowl.  Get that squid ink in there, if you can.

Add the juice of half that lemon, the Chohula, the salt and pepper.

Drain the farro, add in and mix, I found using my hands most effective.

Stuff the squid bodies / tubes.  I discovered that there seems to be a block before the stuffing reaches the bottom of the tubes… using my non-dominant hand, I’d squeeze the stuffing down the tube until it reached the bottom, and with the other hand, continued stuffing.

There will be a surplus of stuffing.  But hey, fun eating!

Arrange the stuffed squid in your baking pan – yeah, I cheated and went with disposable, this was an unexpectedly hectic day…

Drop the remaining stuffing around the squid.

Squeeze the rest of the lemon juice over the pan’s contents.

Top with a sprinkling of garlic powder  – if desired, add more.

Scatter a tablespoon or so of tamari/coconut aminos over the excess stuffing.

Add the butter over the stuffing, to help keep the farro from drying out.

This post is now linked at Fiesta Friday, with this week’s co-host, Antonia @ Zoale.com.

The foodie me: Low/no gluten, low sugars, lots of ethnic variety of foods. Seafood, offal, veggies. Farmers' markets. Cooking from scratch, and largely local. The "future" me: I've now moved to my new home in rural western Massachusetts. I am raising chickens (for meat and for eggs) and planning for guinea fowl, Shetland sheep, and probably goats and/or alpaca. Possibly feeder pigs. Raising veggies and going solar.
View all posts by goatsandgreens →
This entry was posted in Cooking, Seafood and tagged courgette, farro, Recipe, Stuffed Squid, zucchini. Bookmark the permalink.

3 Responses to Squid Stuffed with Farro and Zucchini(contains gluten)