Posted on February 24, 2018 by goatsandgreens

I adapted a dish originally made by the chef Marcus Samuelsson, for Black History Month.  (I don’t know if this is a thing elsewhere in the world besides the US.)

My changes (in addition to downsizing a bit as 8-10 servings for one person would be overkill) were using a serrano pepper instead of habanaro (it’s what the supermarket had), and using veggie broth instead of chicken stock, because I wanted to go vegetarian with this dish, but chicken should also be good.  My hand slipped in decanting the coconut milk, and so there’s a bit more, but I decided what th’ hey.  (It is supposed to be the same amount of coconut milk as the broth.)  The recipe doesn’t call for pre-soaking the beans (black-eyed peas are actually technically beans) but I’ve been too indoctrinated, I guess, by Nourishing Traditions to do otherwise.   Pre-soaking may also reduce flatulence if you are prone.  The recipe’s simmering/draining step may well take care of both problems. 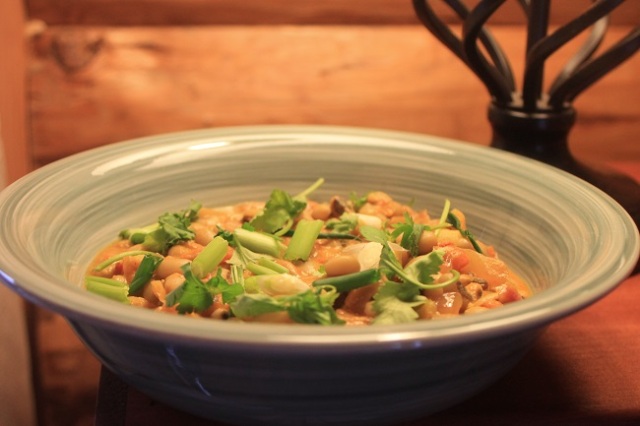 You will find the original recipe at:  Food and Wine

I ordered berbere seasoning online from Amazon; I’ll experiment with making my own another day.  Berbere is a peppery Ethiopian spice mixture containing paprika, cumin, onion, coriander, peppers, and other spices.

Cooking at an early stage of ingredients.

Soak the black-eyed peas overnight and rinse.  This will largely remove anti-nutrients from the beans.  They will expand!

In a large pot, add the peas and add water to cover.  Bring to a boil on your cooktop, and reduce heat to a simmer, and simmer until soft or tender.  About 35 minutes.  (They will cook further later).

Add a pinch of salt, mix, and let stand 5 minutes before draining thoroughly.

Meanwhile, in a large skillet, melt the butter or ghee (if vegan, use a high heat oil; I’d recommend avocado). Add the onion, garlic, ginger and chile and cook on medium, stirring occasionally, until the onions are translucent, which will be about 10 minutes.

Add the berbere and turmeric.  Stir for about 2 minutes, until you can appreciate fragrance.

Add those tomatoes and stir for about 5 minutes.

Add the liquids (coconut milk and stock), and boil.  Drop this back down to a mild simmer, and stir periodically.  You want to thicken the sauce some.  This will take approximately 20 minutes.

Add the peas to the sauce (or vice versa), and cook at medium low, stirring occasionally.  Do this for about 10 minutes, so that all the food is hot, and the peas are well-coated with their sauce.

Beginning to simmer everything down prior to the addition of those peas.

VERDICT:  I liked this a lot.  One can add more heat to the dish, but the heat that is there will grow.   There is plenty of flavor nuance.  Definitely a keeper.

Peas are in the pot.

A note about Marcus Samuelsson:  I just finished reading his autobiography, Yes Chef, and loved it.  He was born in Ethiopia, but he was adopted along with his sister to a Swedish family after his mother died of tuberculosis.   He dreamed of becoming a soccer player, but he was not large enough physically, so opted instead to delve into his love of food and become a chef.  He was professionally trained in fine French cooking, and brought a Swedish attitude to his cooking.  Later, when he was asked about recipes from his native Africa, he realized he needed to up his game, and start investigating African foods.  This dish is one of the results.

Samuelsson has at least one cookbook on African recipes, which I plan to order.  The Soul of a New Cuisine:  A Discovery of the Foods and Flavors of Africa.  He’s also written up a cookbook of Swedish fine dining (with French influences).  He also owns a restaurant in Harlem, New York City, that I’d love to get the opportunity to go visit. 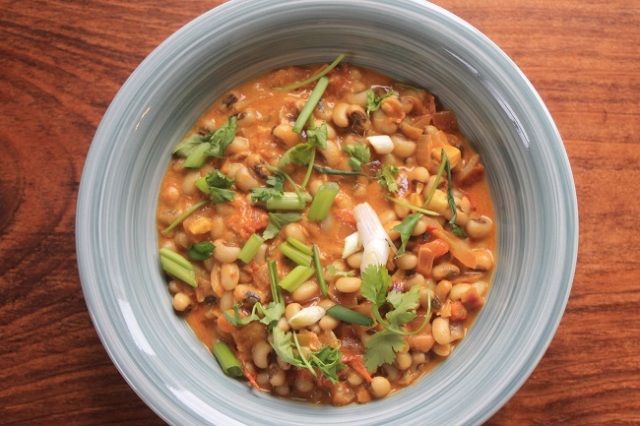 Definitely worth the creating!

This recipe is happy to be over at Fiesta Friday, where this week’s co-hosts are Antonia @ Zoale.com, and myself.