Arrival of the Chicken Tractor & Coop!

Pulling up my driveway with the coop, the feed bin, and the tractor.

Seriously!   The chicken coop is here!   I’ve put the birds (the broilers) in, but have to do more work before we’re totally copasetic. They HAD to go out, whereas the laying hens can wait a few days – up to a week if they have to.   They’re younger, and smaller anyway.  And so… 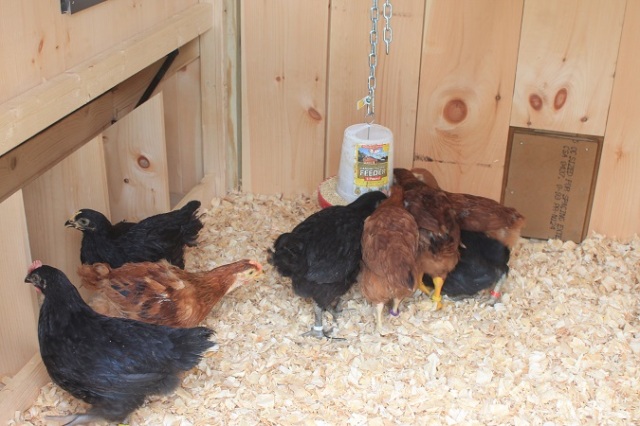 Temporary home for eight broilers until I can move them to the tractor. (Which absolutely needs the solar-powered electro-net.) This is actually the future home for the laying chickens, which remain right now a LOT smaller in size!  PS, that dark brown block to the right is the door to the run for the coop.  Closed off as evening is approaching… and these birds need to get used to being here.

Thursday or Friday, I will get assistance and know-how setting up the electronet fencing for the chicken tractor, which will have its own solar source.  This assistance will come from one of the people who sold me their equipment (both individuals plan to move from the area, and won’t be doing chickens in their future locales), so she knows her way around the equipment.  At that point, I can move the broilers from the coop to the tractor, clean out the coop  to start afresh and make things ready for the layers who will be needing the coop as a year-round homestead. 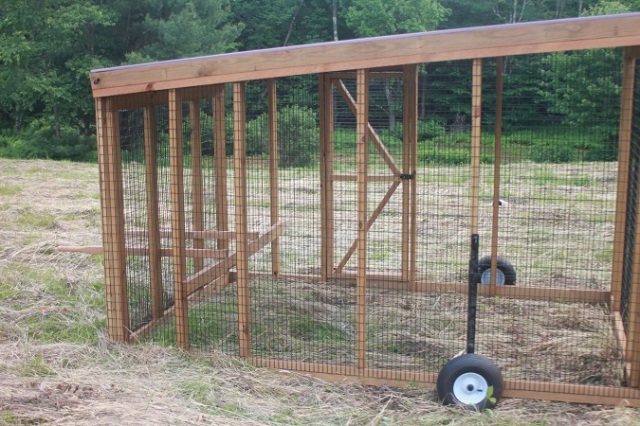 Chicken tractor. This does need the electro-net fired up around it. It will move periodically. The door so I can enter is on the far side. It has a roof to cover, to protect from rain and excessive sun. Until I get the electro-net charged up and running, I don’t consider this safe enough for my birds as it stands. We’s got predators here…

The coop will have electronet around it, too, but it is less immediately critical to do so.  Instead it is indeed critical to get the broilers OUT of my basement!   (These units were supposed to have been delivered the week of May 26th, which would have given me much better leeway.) 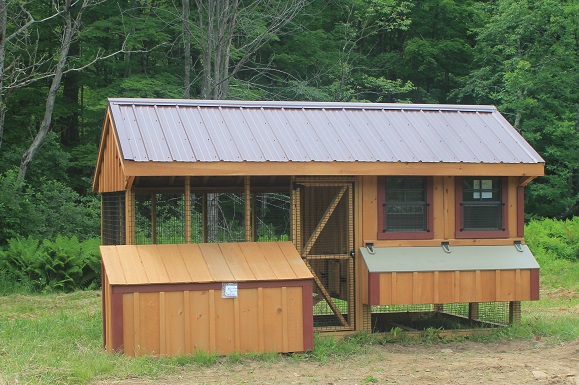 The coop and run. There’s a feed bin in front, left side. Awesome! Yes, I will let the (laying) chickens out of the coop and the run, once we get going with electro-net. I’m not going to be totally free-range, because I really don’t want to feed the neighborhood hawks, owls, and foxes… But these birds will be omnivores, which is as they should be.

Bedding in the coop:  Either straw or pine/wood chips/shavings are recommended.  NEVER use cedar… the aromatics in cedar are wonderful to human noses but contain substances you don’t want poultry to ingest.  You want to make sure your chips or shavings, if you go that route, have low or no sawdust, which adversely affects delicate poultry respiratory systems.  I’ve seen recommendations for straw, and I’ve seen recommendations for the shavings.  I’m doing the shavings for now, but I suspect straw may be cheeper.  (oops, sorry.)

Meanwhile, the broilers have been housed in large cardboard boxes in my workshop basement room — four currently in the box for a toilet (appropriate?), and two apiece in other boxes I “borrowed” from local friends (they won’t want ’em back)!  I rotate them around when I do box cleanout changes, so they get to know their compatriots.  They are social animals; you don’t want to house them one per box, ever (well, if one is sick, this may be your best option). 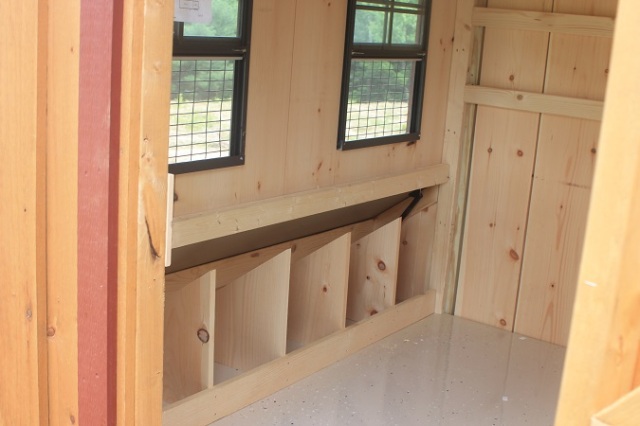 Nice epoxy floors for easy clean out. Windows that open, with grates in front, to keep in, in, and out, out.   Below, laying box areas.  Yes, hens will try to use only one or two of these, but… hey… options.

The main thing I have to deal with is that the entry for humans into the coop is 18 inches off the ground.  With my bad knees and a bad ankle, I will have to build steps as soon as possible (I was able to get in there today before I put the birds in, in order to set up the feeders… but such activity right now requires me to sit on the flooring and then hoist myself up.  Now that there are birds in there who are leaving droppings, I want to have steps!  This will happen shortly.   I will also install a pull bar so I can get in with even less effort.) 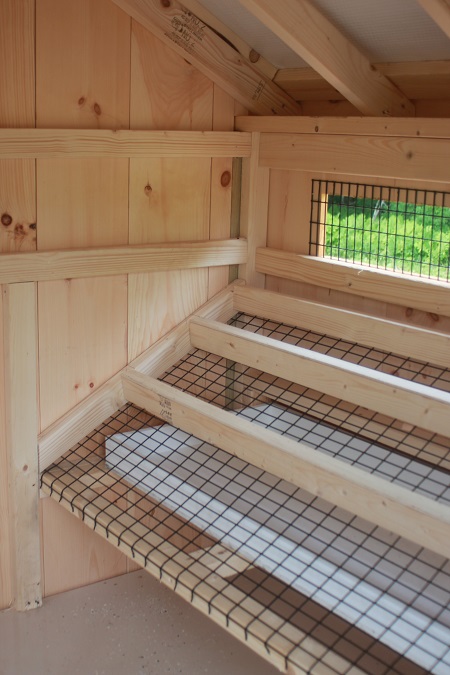 Chicken roosting area, with ventilation you can open or close to the right. Underneath is a tray you can pull out when needed to clean this stuff out.

The coop has a pull out tray there, so you can clean outside, without worrying about roosting birds. 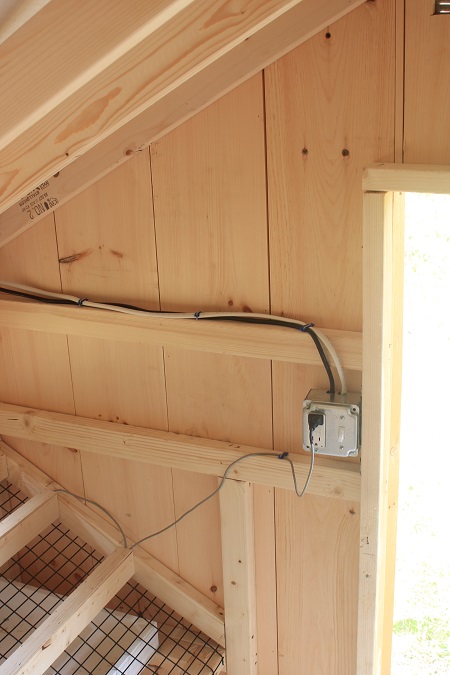 Chicken roosting area is wired for sound. Well, not sound, but for heated roosting perches, two of them. This is also wired for a light overhead. Not essential right now, but certainly since my laying birds will live here for a few years if all goes according to plan. Having a light on in the late autumn months will keep the layers laying longer into that season.

We’re wired here, even if we are not totally wired yet.  Temps were in the very high 80’s today, so heating the roosts would be.. counterproductive, eh?

Tasks:  I put in nails and one chain (so far) for holding up food off the ground in the coop proper.  I do have a large 15 gallon waterer which will end up in the chicken tractor.  I will be setting up watering systems both inside and outside the coop (but within their built-in run), right now they can deal with water in a nesting box.  I am running a hose from the house to the coop so I am not lugging water around – I’m using hose material that is rated for human drinking water (most are not; most contain lead).

We are linking to:

The foodie me: Low/no gluten, low sugars, lots of ethnic variety of foods. Seafood, offal, veggies. Farmers' markets. Cooking from scratch, and largely local. The "future" me: I've now moved to my new home in rural western Massachusetts. I am raising chickens (for meat and for eggs) and planning for guinea fowl, Shetland sheep, and probably goats and/or alpaca. Possibly feeder pigs. Raising veggies and going solar.
View all posts by goatsandgreens →
This entry was posted in Commentary, Poultry and tagged chicken coop, chicken tractor, homesteading. Bookmark the permalink.

10 Responses to Arrival of the Chicken Tractor & Coop!