Posted on January 12, 2018 by goatsandgreens

I haven’t driven since December 13th (recovering from surgery), and my pantry in my new home is not yet installed, so some of my foodstuffs are not readily find-able.  But I was in the mood for a nice winter-body warming soup.  Asian.  Pho?  Hot pot? Ramen?  Tom Yum?  Something else?  It’s cold out there!  Winter Is Coming?  Nope, I’m afraid it’s here! 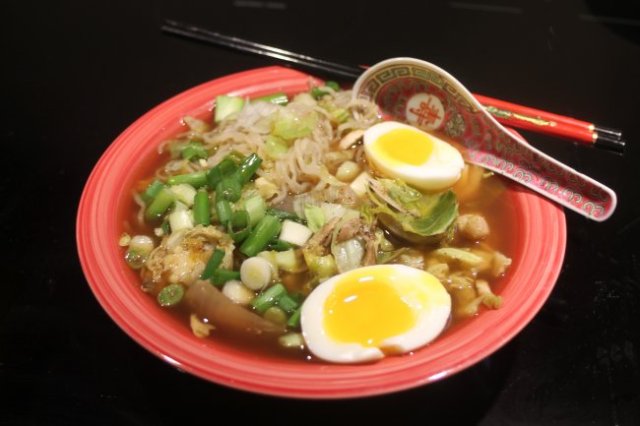 An eastern Asian inspired hearty soup. And, seriously, the Chinese soup spoon is one of the best utensil inventions around.  Much more efficient than the western world’s soup spoon.

I also had half a pack of spaghetti-shaped white yam noodles to use up.  Grain and legume-free, these would go Paleo nicely.

And, over New Years, I’d made a crock pot full of stock – this time containing just about anything in my freezer:  chicken, beef, lamb.  I was surprised I hadn’t run into pork bones.  Anyhow, I had made that up then, adding onion and a splash of vinegar (the latter to draw out nutrients from the bones and collagen, not enough to give it flavor.  Home made stock, unless you know what you plan to do with it, should be mild and innocuous, allowing for any culinary direction you want, later.  So I don’t salt or pepper it, or add seasonings when I make it.  Onions are about it!  I cook it down to condense it, then aliquot it out and freeze it.

There was a small amount I hadn’t frozen, and that became the basis for this body-warming soup. 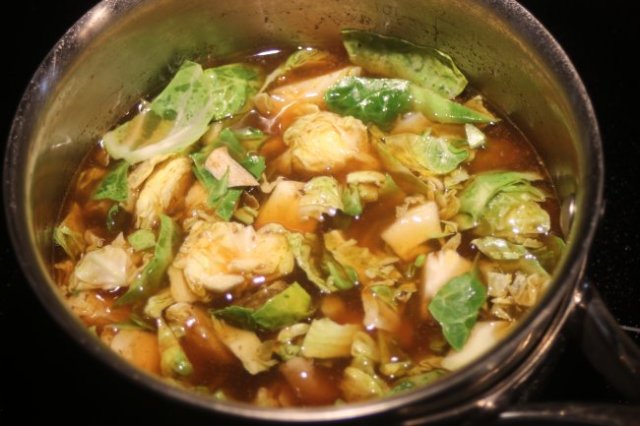 Everything up through the Brussels sprouts (or other Brassica such as cabbage) has been added.

Rehydrate your stock to your preferred level of stock for making soup.

Bring to a boil, then drop down to a light simmer.  Cook about 7-8 minutes, so that the pork belly cooks through.

Add the Brussels sprouts or cabbage, and the garlic.  Cook another couple minutes at that simmer, stirring once or twice.

Add the mushrooms.  Cook another 2 or three minutes, with a stir or two.

Add the noodles, and cook for another couple, again stirring once or twice.

Pour into a bowl (this serves one as a complete dinner), or into two bowls (if this is intended as the soup course to some main food item).   Splash on about 1/4 teaspoon of sesame oil into the bowl (or each bowl, as the case may be).  Carefully slice the egg in half, and add to the bowl/s accordingly.  Scatter the scallion pieces as appropriate.

If you have these, it would be ideal to add to the serving bowls:  fresh cilantro (coriander leaves) and/or Thai basil, both slightly chopped.

Note, do play around with the veggies and meats you add.  Bean sprouts would have been lovely here!  Likewise subbing oyster or shiitake mushrooms for the white buttons would add an entirely new dimension.  Seafood, such as shrimp or squid (added near the end) would be tasty.   Chinese broccoli (very different than Western broccoli as far as flavor profile goes) would be welcome.  Water chestnuts?  (I know I have some of those in the house, in some box or another…)  Want to change the noodles?  Simply go have fun — you only need a few Asian basics to make a go of this sort of heart-warming winter soup!

Everything added except what gets added when the soup gets plated…. (OR, would that be “bowled”??? Hmm, didn’t think so.)

This would be a good dish for a Whole 30, should one use coconut aminos instead of the soy-based tamari.  (I plan to do a Whole 30 later this year, sometime after I can drive myself again.)

This recipe blog post is linked up over at Fiesta Friday.  Your cohosts this week are Shinta @ Caramel Tinted Life and Diann @ Of Goats and Greens  Ah, yes, the second co-host is me.  Great fun, I get to read lots and lots of tasty items!

This recipe is also shared over at What’s For Dinner?   Come drop on by and find your dinner…

13 Responses to An Eastern-Asian Soup