Posted on October 8, 2017 by goatsandgreens

I love using my new induction range in my new kitchen!  I was going to share this meal with my general contractor Saturday at lunch, but he’d come in early and left before I got there, to go attend a wedding he’d forgotten he and his wife had committed to.  Oh well… his loss! 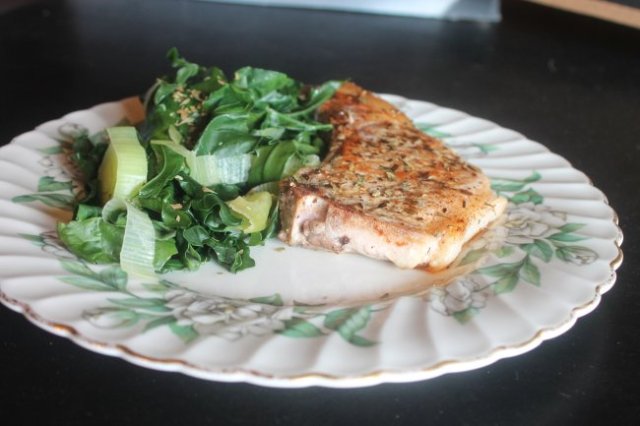 My serving of kale and pork chop

The kale was going to be the focus of this recipe, since I grew it myself.  I planted four plants, but the soil is so lush where they are that it looks for all the world at a distance that there were at least 8, maybe ten, kale plants.  My general contractor does love most if not all members of the brassica family; unlike some folk who regard kale as punishment, he does not.    My goal in making this dish was 1) to use kale… and 2) to prepare something quick and nutritious for both of us that we’d both like.  (He’s diabetic, and the closest “restaurants” for quick lunch turnaround don’t exactly have the healthiest foods.  It all seems to be burgers, fries, chili, pizza, and sugary baked goods…  Minus vegetables.) 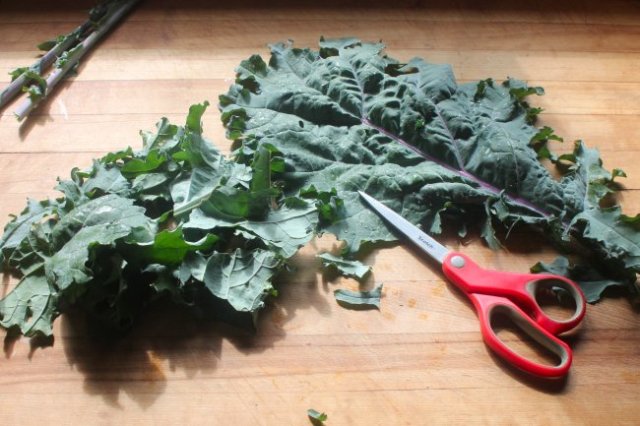 Prepping kale – for large kale, as opposed to “baby” kale, removing that tough center vein is usually helpful. (You can always save the veins with other vegetable scraps for veggie stock.)

I can’t recollect the variety of kale with absolute certainty, but the reddish stem points to Red Russian Kale (sometimes known as Red Winter Kale).  Even though the leaves are large, and they take longer to cook than baby kale, it’s been noted by visitors to my new homestead that this is a milder kale for the leaf size than many.  (Yes, I’ve been feeding kale to several and all!!)

Prepping leeks. You can always sub in onion, just chop finer. And, where’s the turnip? Alas, the problem with owning two homes is that the turnips got forgotten back in CT, but I dearly wanted their crunch!

The pork came from a Connecticut free-range farm, and is so much tastier and healthier and better for any locale than those factory farmed swill-generating places. These chops were about 3/4 inches thick — much less, and they tend to run dry too quickly, and they are bone-in, which adds more flavor and also makes them more forgiving to cooking vagaries.  Thinking about seasonings led me to consider nutmeg, which goes well with pork.  Tarragon would go with both, and so… it was.

Prep Time:  10 minutes.
Cook time:  about 10 minutes for the chops (depends on thickness and your range), about 15 minutes for the kale/leeks.
Rest time:  5 minutes.
Serves:  Two.
Leftover friendly?  Yes, but I’d re-heat the pork chop in the microwave, to encourage it not to dry out.

Simmer a vegetable steamer, and add the listed items for the kale, excepting the tarragon to the strainer side of the steamer.

Allow to steam for 15 minutes.  As noted, other varieties or ages of kale may take less (or more!) time.  My length of time allows for a bit of texture to remain, although it is indeed easy to eat.

Plate and add some tarragon and perhaps ground pepper for additional flavor.  (I have also made this by adding a pat of butter when plating.)

Pat the pork chops dry.  This will help brown them, watery chops will just steam instead.  Season with the seasonings on both sides.

Put a skillet on medium high heat on your range, and allow the pan to get hot.  Add a small drizzle of your high heat cooking oil.  Your goal isn’t to smoke the oil, but to get the pan hot so that when you place your chops down, they won’t stick to the pan.  Plus, this will also assist the browning.

Add the chops, and flip after about 3 minutes,   (You’ll probably want a splatter guard.)

Flip again after another three.

Lower heat to medium, and allow to cook, flipping once again as needed.  Note that every range top is different.

This the kale growing outside my house: 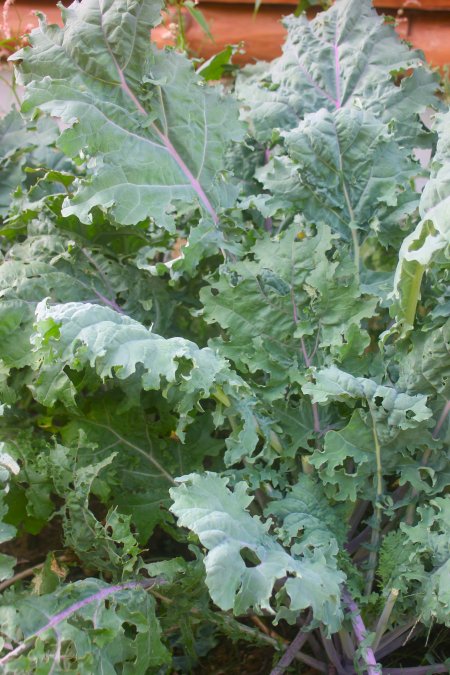 Kale growing outdoors.  All Hail Kale!  It loves that soil!

Kale size compared to my rather long hand. *Hand Selfie*

Partying over at Fiesta Friday, once again.
This week’s co-hosts are Suzanne and Ginger.

The foodie me: Low/no gluten, low sugars, lots of ethnic variety of foods. Seafood, offal, veggies. Farmers' markets. Cooking from scratch, and largely local. The "future" me: I've now moved to my new home in rural western Massachusetts. I am raising chickens (for meat and for eggs) and planning for guinea fowl, Shetland sheep, and probably goats and/or alpaca. Possibly feeder pigs. Raising veggies and going solar.
View all posts by goatsandgreens →
This entry was posted in Cooking, Garden and tagged kale, Paleo, pork chops, Recipe, Whole 30. Bookmark the permalink.