Posted on January 27, 2013 by goatsandgreens

I have a Kindle, and I’ve discovered there’s a world of apps out there.  Applications aren’t just for smart phones (I still run a dumb phone, although my current one also can hit the internet, sort of, and take photos.)

Since most apps seem to be made for the Apple operating system then trickle down to the Android (although this may well be changing considering the success of Samsung), the three food-relevant Kindle/Android-able apps I have are likely also available on the iPhone, iPad and iTouch as well.

(Yes, that’s what it’s called) This is good… by listing foods one is apt to buy, even if infrequently, one can check them off when done (or not wanted), but they’re on the list to jog your memory.  Sort of like, “Well, if I had thought about needing shampoo, I wouldn’t be running out for just that errand!” 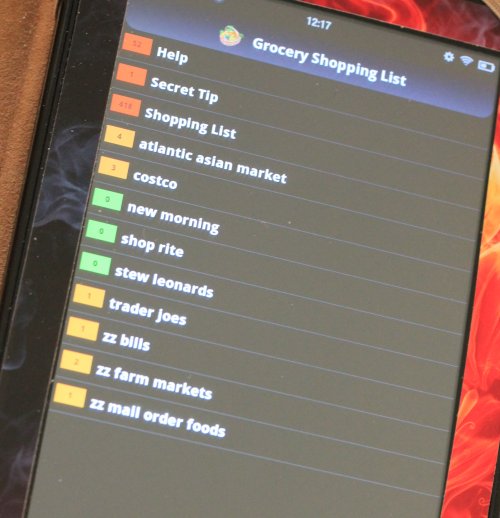 Mostly groceries but some flexible other uses.  The “Shopping List” near the top is their default, not used by me.  You CAN delete it.

On a fairly regular basis I shop at six different grocery-type outlets.  Thus, I’ve set up six different stores and the items I am apt to by at each.  The app comes with a default shopping list which I simply used to get ideas from to start with, but mine are a whole lot healthier. You can drill down three levels:  top-level for instance would be the store itself, the next level would be the general type of item (Veggies, Home Care, etc — all names are fully editable), and the third layer is the specific item (Extra virgin olive oil), etc.  So for veggies I list any veggie I am apt to buy, and check them off until I am ready to consider purchasing them (whereupon I check them on).    For things like seafood and veggies, I also have created a “random” choice — just a reminder that I want something but will judge what I want by freshness or uniqueness or whatever. 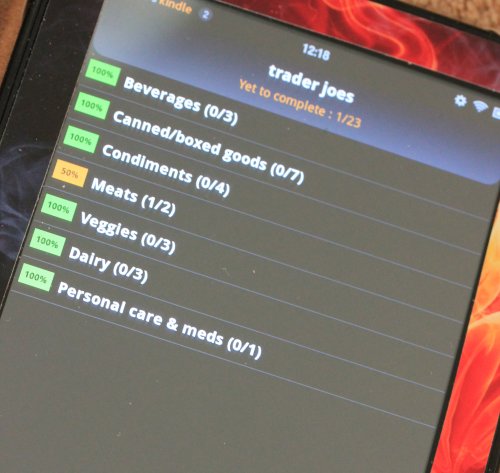 Inside Trader Joe’s, general categories.  I don’t shop here that often so the list isn’t extensive, at least yet.  (The 3rd Veggie is “Random”)

You can mail these lists to your spouse or housemate so he or she can pick things up on the way home from work, too.  I would imagine this would be useful for people shut in at home to send to caregivers.   You can order items any way you wish (except on the top layer, where one would put the actual store names — that one defaults to alphabetical).  I find it convenient to order the food categories within stores by the circuit I’m likely to take around the store, but putting household goods (personal items, cleaning supplies) in at the end. 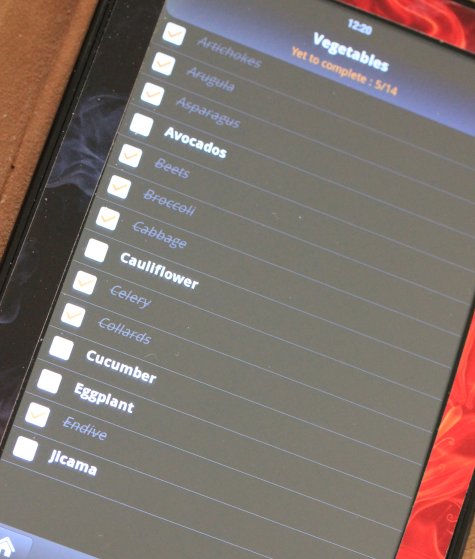 Inside the veggie category inside the ShopRite store. I arranged these alphabetically., it is not automatic.  You can’t see the check marks in the boxes for the items not needed or wanted at this time. But those items are dimmed & crossed out.  PS, I put in a second file category  for the veggies at the far end of the alphabet, but you don’t have to.  It will scroll down.

Anyhow, it is very handy to refer to in the grocery — you don’t need wi-fi connectivity to use this efficiently. You don’t need to do this merely for food.  I have a very basic bill-paying category too — since my credit cards expire this year, I want a way to remember and track which payments go where, which are automatic (and need to be renewed in time!), and so forth.   (I do not EVER again NEED for Netflix to charge me ownership price for the two DVDs I had out at the time the credit card company decided to cancel the card because it was “compromised” in non-specific ways.  And, no, they didn’t reimburse me, despite the fact I sent the DVD’s back.  I may have caught this in time, but I seriously don’t watch very many movies.)   I don’t put any amounts in, but I do track when I will be paying (for the non-automatic things such as the safe deposit box), so I have a heads up reminder.

This is a small app which contains a list of most of the cuts of beef you are likely to come across.  (Okay, yeah, it misses out on sweetbreads and kidneys, but they do list tongue.) Each cut of meat comes with a photo of the item in its raw state, a rating system (tenderness, flavor, value, leanness), alternate names if any, and general ideas for preparation.  You’ll also get ideas for cut substitutions if you can’t find, say, flank steak. You can mark your favorite cuts and leave notes on each cut should you wish. 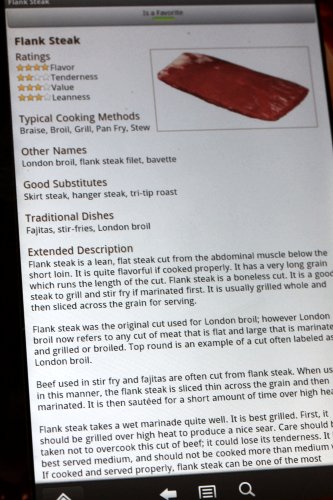 Cuts of Meat app: not seen here – my notes for my favorite way of preparing this excellent & inexpensive cut

RECOMMENDATION LEVEL: GOOD AND USEFUL, BUT COULD HAVE A LITTLE MORE INTERNAL CONSISTENCY.

I keep surfing for a related app:  Cuts of Pork.  Apparently it does not yet exist.   Another good suggestion would be Odd Vegetables/Fruits.  Just to give one a general overview without actual recipes, of things like ugly fruit, cassava, etc.  The app would have to have photos, too.  My main grocery store used to have signs with photos telling us what each vegetable is, and how best to eat (raw, baked, braised, etc.) but some of those signs have now vanished.  A good shopping reference app would be lovely.  Okay, you app developers out there:  Get busy!

I just got this one, and while I haven’t finished setting it up yet, and the initial process will take some time, I’m hoping it will be convenient to use once underway.  I am tired of finding bits of stuff that could have once been animal, vegetable (but probably not mineral) tucked into back bypasses of the fridge.  We will see.  It couldn’t hurt. Plus, being that I have an extra freezer down in the garage, it would be handy to remember where I’ve frozen away, say, that Boston butt, or the homemade chicken stock.

Set up locations for finding your food. This part also allows for some descriptive text, which so far I haven’t used.

It comes with a few default locations — I’m using N/A for items like potatoes and onions that I don’t store in the fridge.  (I am so NOT going to be tracking canned goods.  They have a long enough shelf life.  Okay, hard-core preppers may want to do that, but.)  You can add in new locations, but you can’t re-arrange their order (but you can delete and start again). You can enter specific food in a couple of ways:  Directly each time, or via food templates.  The latter is handy for things you get often enough and which have a pretty standard shelf life.  Templates are remembered alphabetically (hence, I have Lemons, sliced” rather than “Sliced Lemons”.) 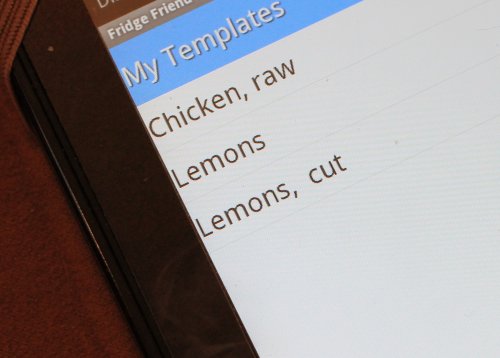 Haven’t gotten many templates in yet, but use for foods with a standard shelf life — ie raw chicken should be cooked within 2-3 days. You’d enter that when setting up that food item..

To enter your food into Fridge Friend – write up your item, select the date to which it is good until, and the number of, say, apples, you have.  OR, call up the template and edit anything about it you wish — number of items, say.  These get organized by expiry date.   Obviously with real food you do some guesswork.  Under preferences you can set up the color code you want (although as per my example, it doesn’t have a color choice for really expired food over something you’d better use in a day or two).  You can also set it to set off an alarm (although if you do so, PLEASE change the time the alarm goes off, unless you work nights!) 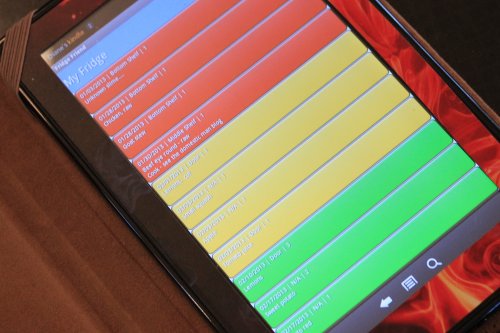 Eat em soon (red), you have leeway (yellow), safe to have hang around (green). Alas there’s no brown or purple for THROW IT OUT… the top item is a test of that feature, but alas I did find one such item in the fridge just now…. 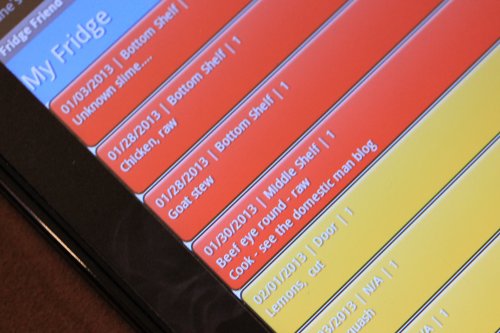 … Let’s zoom on in…
I do have an extra day on the beef as it is currently fully frozen.  Notes for whatever purpose are available for one to use.  Unfortunately, I don’t get a different color for something truly expired…

You can export data to an e-mail account.  You can scan the little box code that comes on packages if your setup has a camera — presumably that fills in the name and sell-by date.  You can also share this app (I don’t know if that means it will post in your FB account (as that is a choice) that you are using this app, or if it will port up the contents of your fridge and freezer to the site.  Neither idea sounds particularly interesting to me.) I wish you could simply see everything that is in one specific location at a time (occasionally that would be useful), but you cannot.

There are a LOT of recipe apps out there.  Frankly, when I am cooking I want to see something in bigger print than a Kindle or a smart phone will provide.  For anything “how to” such as recipes, I’d rather buy the physical book, or go to my laptop and write things down (or print them out).  I have friends, though, who have a kitchen-dedicated iPad that they’ve hung on the wall or something, that they can read at just the right height without squinting while they prepare recipes.

Grocery Shopping List: $0.99   (There’s at least another app out there that tracks prices for you, but I don’t want to enter THAT much data just to shop.  I do have a life.  I make notes on some of my seafood (for instance) items simply to buy them only when they are on sale.)
Cuts of Meat:  $1.99
Fridge Friend:  $0.99

The foodie me: Low/no gluten, low sugars, lots of ethnic variety of foods. Seafood, offal, veggies. Farmers' markets. Cooking from scratch, and largely local. The "future" me: I've now moved to my new home in rural western Massachusetts. I am raising chickens (for meat and for eggs) and planning for guinea fowl, Shetland sheep, and probably goats and/or alpaca. Possibly feeder pigs. Raising veggies and going solar.
View all posts by goatsandgreens →
This entry was posted in Commentary, Reviews. Bookmark the permalink.