Makes for a fine brunch. 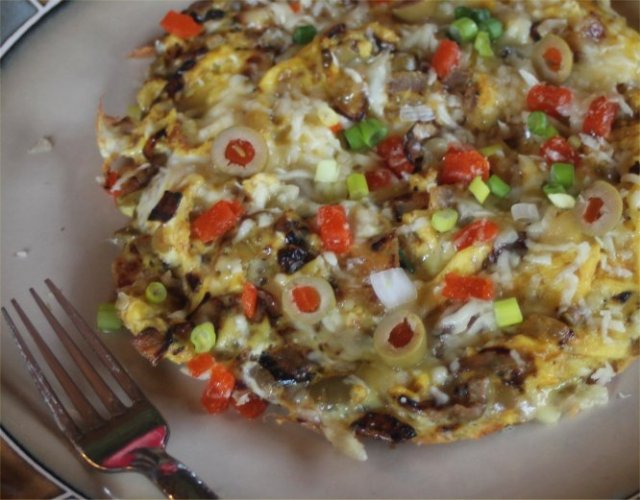 Onion and olive frittata for brunch.

Adapted from Christopher Kimball’s Milk Street, 2017 (September-October, page 10), which in turn comes from Deborah Madison. My changes are in halving the recipe and, well, adding olives. I also substituted in a few minor changes based on what’s in my “Stay at Home” house. The main point in following parts of the recipe, for me, was discovering appropriate timing and overall concentrations of ingredient types.

Partial mis en place, noting that the ingredients for the sauce ended up not being used (do to cook’s error in turning her back on the simmering vinegar…) Onions, olives, pimentio, cheese, scallions. And, of course, the eggs.

A frittata at some point gets the eggs pan-fried, which helps differentiate it from a crustless quiche – wherein the eggs are entirely baked.  I have noticed an entirely different egg texture when the eggs are in part fried, or if they are only cooked in the oven, which to me is a significant reason to watch the terminology.  (And, additionally, I’m fine re-heating leftover quiche, crusty or otherwise. Not so much with partially-fried frittata texture…  it doesn’t hold.)

I didn’t use the salt as requested in the original recipe – salted butter, olives and cheese contain sufficient. I list it here in case you are a salty person…

These jarred olives with pimentos tend to be less “olive-y” tasting than some other types.  What with my buying these from a very tiny and small independent grocery during this COVID-ish era, this was my choice, so I went with them – olives were part of an online challenge I undertook.  If you use other olives you may want to decrease the number you use – especially since the other olives also tend to be larger.  Of course then you won’t have the pimento, but buying a jar of pimento and slicing down small bits accordingly could add both that flavor and the visual effect.

I tried making the sauce, but I turned my head too long from the skillet – so I had to cancel that, as all the vinegar had evaporated.  But I include that part below (in italics and blue-grey font) so you can attempt this for yourself.  DON’T turn your head!  The sauce, however, is not really necessary.

Overhead. Serves two. Doesn’t require the sauce, but I regret not being able to make it properly.

Made April 18th, 2020, in a rush for an online recipe challenge utilizing olives.

Beat the eggs with the (optional, but up to 1/3rd teaspoon salt); and ¼ teaspoon pepper.

Remove the pimentos from the olives, and set aside. Chop the olives coarsely.

To an 8-inch nonstick and oven-proof skillet add half a tablespoon of butter, and melt over medium low heat.

Add the onions, and cook (covered) about five minutes, or until softened and waters are released, stirring occasionally. Remove cover, turn the heat up to medium high, and cook for another ten minutes, stirring, until the onions brown.  (I found that my onions were ready in 5-6 minutes.)

At this point, stir in the garlic, chopped olives, and the half teaspoon of vinegar. Cook another 30-60 seconds, or until the vinegar has evaporated.

Pour the eggs into the skillet, using a spatula to push the eggs from the edges into the center of the skillet. Incorporate the veggies.   When the eggs begin to set (approximately 1 minute), roughly smooth them out, and place the skillet into the pre-heated oven.

Leave the skillet in the oven for 3-5 minutes, to further set the eggs. (Meanwhile, do leave the cooktop burner/hob on, if you intend to make the sauce.)

Remove the skillet from the oven, and sprinkle the cheese on, evenly.   Add the pimentos atop as well. Return to the oven and continue baking for another minute or so, or until the cheeses melt.

Remove the frittata from the oven, and, using a spatula, gently remove this from the non-stick skillet onto your serving platter.

Sprinkle half the chives or scallions over the frittata.   (I also sliced up an olive or two as photography décor.)

Return the empty skillet to the heated cooktop, and add the remaining vinegar to this. Allow to cook down to about a tablespoon or so of liquid. This will be no more than a couple of minutes. Off the heat, stir in the remaining butter, the mustard, and the remaining scallions or chives.

Slice the frittata into pie-shaped servings, and enjoy with the vinegar/butter/mustard sauce to the side.

For my crustless quiche recipes check the following:  (The cheeses varied in all of these).

I don’t have any crusty quiche recipes, primarily because I really don’t like them as much.  And if I can do less work for something I enjoy more — so be it!

What’s For Dinner? – Sunday Link Up.

The foodie me: Low/no gluten, low sugars, lots of ethnic variety of foods. Seafood, offal, veggies. Farmers' markets. Cooking from scratch, and largely local. The "future" me: I've now moved to my new home in rural western Massachusetts. I am raising chickens (for meat and for eggs) and planning for guinea fowl, Shetland sheep, and probably goats and/or alpaca. Possibly feeder pigs. Raising veggies and going solar.
View all posts by goatsandgreens →
This entry was posted in Breakfast, Cooking, Vegetarian and tagged Brunch, Eggs, frittata, Gluten-Free, olives, Onions. Bookmark the permalink.

8 Responses to Onion and Olive Frittata