I made this once before, to serve with Vietnamese summer rolls, in a misguided notion that it would work even without sugar.  Mistake.  Really inedible…   I ended up tossing it.  I resorted to a pre-made Chinese dumpling sauce that time.  Some things really DO need some sugar…

Vietnamese sauces are at their best with a carefully cultivated balance of sweet, salty, sour and umami.  While vegetarians may substitute the fish sauce with tamari or the like, the full umami will only come out with the fish sauce – however that’s less of a problem than ditching that sugar, apparently! 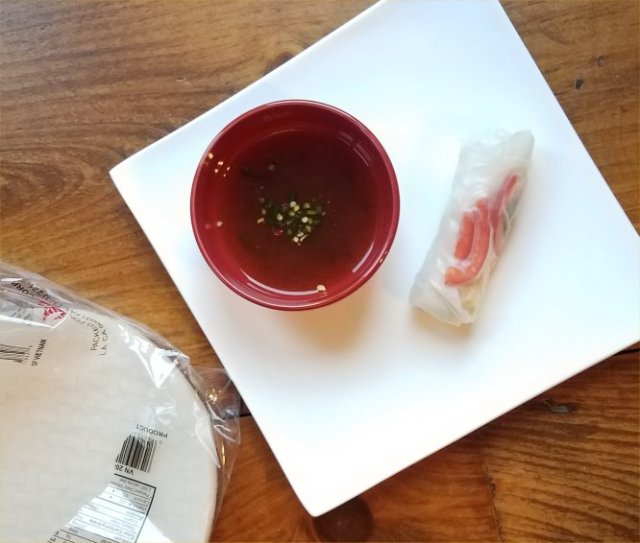 At a recent (relatively) sauce making workshop, I opted to go Asian.  I made this recipe as per James Peterson’s recipe for Nuoc Cham in his book, Sauces.  I did add a little less hot chili pepper than called for – but I had to consider my audience, and the fact that not all hot peppers are created equal, and that my serrano peppers might have been larger than his.  You may of course do likewise, but I do recommend you DO include some hot chili to moderate out the sugar that moderates out the fish sauce.   It’s all a balancing act, and the Vietnamese have had a long time to work this out, while allowing leeway.

See my recipe, Vietnamese Summer Rolls, for a preparation of the actual rolls – although this time I made the rolls themselves strictly vegan, as I figured there would be a lot of heavy constituents from other sauce contributors.  (Mine:  red bell pepper, baby corn, white yam noodles, Napa cabbage, daikon sticks, cuke sticks, spicy sprouts, cilantro, chives, mint.)

Prep Time:  10 minutes.
Cook Time: None.
Rest Time:  It may take up to 20 minutes for the sugar to dissolve.  Shake intermittently.
Serves:  Depends as it is a dipping sauce/condiment.  Should make more than enough for a medium-sized party.
Cuisine:  Vietnamese.
Leftovers:  Refrigerate up to two weeks.

I made a second batch minus the chili peppers (as I didn’t know heat sensitivities of all the attendees at the event), but with up to an inch of finely peeled and diced fresh ginger and some chopped cilantro.  Personally, I’d leave in peppers whether or not one adds in the ginger, because I found the resulting sauce too sweet for my tastes.  It’s that balancing act!  (But then again, there’s obviously a whole mass of humanity who just loves the even sweeter Chinese duck sauce….)  Adding ginger to your Nuoc Cham creates a dish that I am informed by Peterson is named Nuoc Mam Gung.

This recipe is hanging out at: