Posted on January 10, 2020 by goatsandgreens 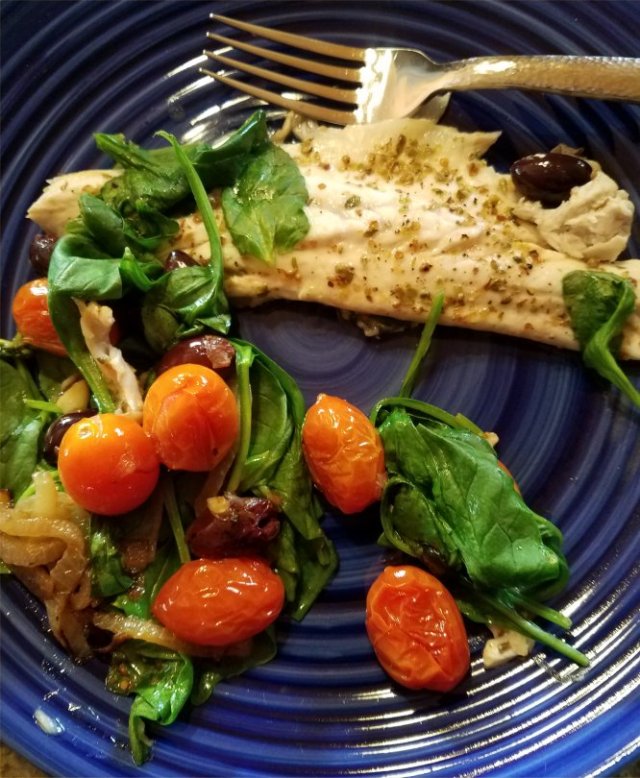 Optionally, add a couple lemon wedges to this bronzini dish, and you are ready!

Another recipe for Whole30 month.  It’s also intended for Fish Friday Foodies, which has a theme of Mediterranean seafood dishes this month.  Since I’ve been wanting to do Greek (and indeed February will be Greek recipes all over the place), and I also didn’t want to do shrimp or octopus, both very prevalent in Greek recipes — I settled on this idea.  The links to the other participants this month are at the end of this blog post – yes, they will land out this way next week when the Fish Friday Foodies recipe links are truly to appear..  (PS, the list is up!)

Bronzini, prior to seasoning. Since it came with the backbone and the tail, I cut this in half after cooking.

Pan frying the veggies and such..

I adapted this recipe from Primally Inspired’s blog:  Easy Greek Fish Recipe.  Changes have been minimal.  I halved the recipe, for personal convenience.  I went grape tomatoes instead of cherry (they are easier to find at this time of the year).  I went a bit beyond duty – the “or so” – in my addition of oregano.  (There’s never enough oregano…) I picked my white fish by what looked good when I went shopping, but the preferred fish would be cod.

Lightly wilted spinach cooks up within a minute and a half.

Feta cheese is optional – but it doesn’t fit in the Whole30 plan, so I omitted it.  I imagine that if you are eating dairy, goat cheese would also work nicely.

Take that half a lemon, cut it into yet another half again, and squeeze the juice from that portion over the fish, laid out.  Afterwards, add salt, pepper and oregano over the top of the fish.  (I’m of the opinion that most salt water fish already comes salted, courtesy of the oceans or of the Mediterranean, so I did not use extra salt).

Set a skillet to medium heat, and add the olive oil.  Let this get to temp, then add the onion.  Cook until the onion is softened, up to five minutes.  Add the garlic, another 30 seconds.

Add the tomatoes and olives.  Add the juice from the rest of that lemon half. Cook for about another five minutes, or until the grape tomatoes begin to burst, or until the cherry tomato halves decidedly soften.

Add the fish into the skillet, so that the flesh makes contact with the skillet surface.   Cover and cook for  about 5 minutes (perhaps more if your fish fillet is thick).  When your fish is about a minute or two from being done, add in the spinach, re-cover and continue cooking.

Plate and serve, adding lemon wedges to the side, and proffering feta to those who want it.  Definitely worth my while! 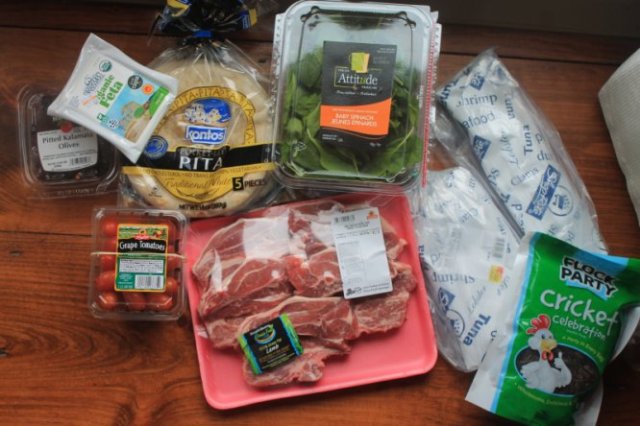 Kalamata olives, Feta cheese, pita bread, fresh baby spinach, fresh eel, crickets, bronzini, Aussie lamb chops (100% grass fed), grape tomatoes.  All obtained from ShopRite, except the olives (which I’d forgotten to grab at that shop) and the crickets (which are for the chickens, not me!)

Sharing this recipe at Fiesta Friday:  I’m co-hosting this time around.  Drop on by and enjoy the fun – and some great recipes!

You should also drop by Full Plate Thursday for some additional wonderful recipes.