Posted on December 13, 2019 by goatsandgreens

Recipe from Autentico,  page 174, by Rolando Beramendi.  An Italian cookbook which truly impresses me.

I meant to post a cookie recipe today for the Holidays (there are a lot – Christmas, Chanukah, Solstice, and probably several others), but one major ingredient went AWOL.   However, this one is a good food recipe, to be served alongside anything else you may want to make this month.  PS, the seasonal Scandinavian cookie recipe I wanted to make for today will appear as soon as I can find potato starch.   Oh, and when I actually use it.

My effort is to make more tasty Italian foods that don’t have to lay on the less useful of the carbs.  This one is also vegetarian, and can work as a side or a main as desired.  If as a side, I’d do it with a light main.  As a main, I’d do it with a light side – perhaps a broth-based soup or a salad.  It is a  bit heavy what with the Fontina and the heavy cream, but it is quite good and appealing.  What charmed me into trying this recipe was the use of farro.

The farro recipe they give is on page 93.  That part will take about 40 minutes to prepare.  Or use the package recipe, which is pretty much the same thing.  I started with half a cup, which of course yields more than half a cup when cooked – the latter is what the recipe calls for.  I got to enjoy some farro au naturel…

Cutting the interior tough rib out of a cabbage leaf. Post blanching, and prior to stuffing this leaf. My chickens adore these.

Cabbage stuffing/filling. I love this farro!

I am making a half-recipe (serves two).   For personal convenience, I am writing this up for those TWO servings.  It turns out that my filling filled seven leaves anyhow – and so that’s what I did.  Some of the leaves ripped when taken from the cabbage – no pictures of me rolling up the ones that ripped off badly.  I am thinking perhaps the elongated Napa cabbage could be a better choice – will of course take more filling.  Also, in my case, my Savoy was rather small (that’s what my supermarket had) and the leaves were hard to un-tuck.  (I managed to untangle 3 or 4 properly.)  But unless you are trying to impress your boss with your cabbage untucking skills, most of the leaves should still work.

All seven cabbage rolls, post baking/steaming. Prior to the sauce.

Roll up methods are very much the same as for Vietnamese summer rolls or for stuffed grape leaves.  .I am glad to note I haven’t lost my speed at it, as it took me a while to gain that!  The next four photos show the process, which is very much the same as in the two linked-to recipes in this paragraph.  But no need to have you surf if I have this here…

Start rolling up from the base.

Folded the right side over, next will be the left side.  Oh, pick your favorite side. 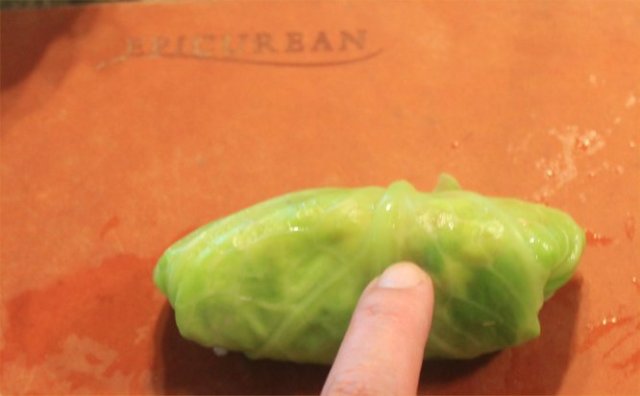 Prep Time:  50-60 minutes.
Cook Time:  35 minutes.
Rest Time:  Not needed.
Serves: 2.
Cuisine:  Italian.
Leftovers: Yes. I suspect the sauce can be reserved on the rolls, or a fresh sauce can be made later.  Depends on the texture you want.

To make the cabbage:

Bring a large pot of salted water to boil.  Fill a bowl with ice water.  Blanch the cabbage leaves for 2-3 minutes to wilt and soften them, then drain.  Plunge into the prepared ice bath.  Take the small leaf, dry with a towel, and slice thinly,

Add this sliced leaf to a suitable bowl, along with the farro, egg, parsley, sage, rosemary, salt and pepper.

On a clean work surface, place a whole cabbage leaf and cut out the tough triangular-shaped rib and discard that.

Add about two tablespoons of filling near the rib edge of the leaf, and roll up towards the outer edge, tucking in the sides, as if making an egg roll.  Do this with each leaf.  Place each filled leaf seam side down into the baking pan.

On the lower oven rack, place a large baking pan filled about 2/3rds with water.  This will insure the oven and thus the cabbage rolls stay moist enough and not burn.

On the other rack, place the pan with the cabbage rolls.  Bake until they begin to dry and harden a bit, about 30 minutes.  Remove, and heat the sauce (below).

Prior to cooking up the sauce!

To make the sauce:

In a small saucepan, combine the Fontina and cream, and cook over medium heat, stirring frequently and taking care to make sure the mixture does not start to  boil.  Cook until the cheese has melted, and all is hot.  Strain through a fine-meshed sieve and drizzle over the baked cabbages just prior to serving.  (I opted not to strain.)

Verdict:  My savoy cabbage wasn’t quite as large as some, or it would have filled more of the pan.  I will say this dish turned out awesomely.

The recipe called for a lot of oil, which apparently was only used to coat the baking pan.  I used a bit less (without measuring).  I admit, on mental autopilot, I began shredding my fontina rather than cutting it – so the filling was made with shredded (which may have meant I used a bit more than the recipe called for), but the sauce was chopped as per instructions.  It was fine.

This is a great book, and I plan to cook more recipes from it.  It is so good to find Italian recipes that I want to make and truly savor and eat.

Let’s keep up with a link party or so.