I’ve finally got into MOVING the rest of my old home into my new home.  (Which seriously involved sorting out stuff that I’d rather not move up here, prior to packing it up and, um, movin’ it up here!)  I’m also trying to set up my garden at the same time – you run out of most of June, you run out of setting up for future harvest at least for this year, in this region of the world.  So, anything I make for a week or two will have to be quick and minimal in the kitchen; I just don’t have the energy.   I’m eating out more often than I usually would, but at least I’m choosing healthy.  By and large.  Usually.   (I’m soooo not looking at you, take-out pizza!)

Another cooking challenge over at Cookingbites.com – this one involves miso, and a soup that I need to make fast, delicious and down to earth nutritious.

Most of the ingredients, prepped and ready to go.

However you make your soup, miso is an ingredient you want to add near the end.  You are advised not to boil it.  It retains better integrity if added while the soup (or other dish) is hot, but not bubbling around.

You can use shrimp, but it is hard to find shrimp around here that wasn’t raised in polluted  cesspools that also endanger the workers tending them.  My squid were wild-caught off of the eastern end of my state. 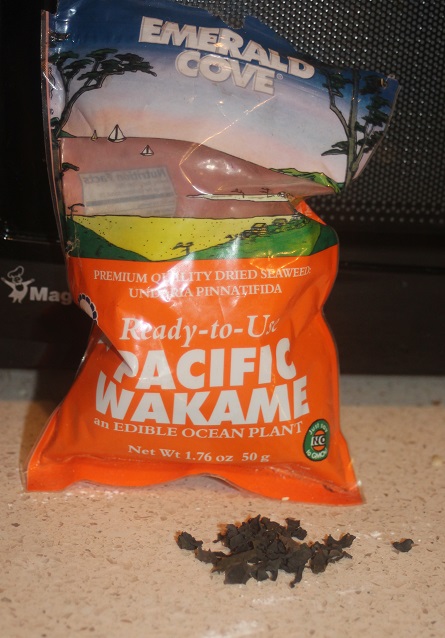 Wakame flakes – fast rehydrating in this format. (If you use larger chunks of seaweed, rehydrate in warm water for about half a hour, and drain.)

Okay, what’s miso?  It’s a fermented legume paste (yes, I also have chickpea miso in my fridge).  Usually it is fermented from soy / edamame.  Some misos may also include or be based around fermented rice.  The length of time spent fermenting (as well as the ingredients) will determine the strength of taste.

I used the Sweet White Miso to the right, from soybeans.

Fermenting foods has a lot of health benefits – won’t go into them this post, due to time issues.

So… let’s get cooking!

Boil the water with the kelp/kombu – reduce to a mildly bubbling simmer, and continue cooking for 10 minutes.

Remove the kelp/kombu, and discard.  Add the fish sauce, snow peas, bok choy  and oyster mushrooms.  Simmer for another 4-5 minutes.

Meanwhile, take the arrowroot powder, put into a small bowl or cup, add three teaspoons of the soup base, and mix with a fork or whisk, until dissolved.

Stir this into the soup.

Add the squid and the wakame flakes, cooking for another minute.  Toss in the chopped scallion.  The squid should only cook at this temperature about a minute, maybe up to 90 seconds, to keep it from going rubbery.

Reduce heat, add the miso paste, and stir.  Immediately add the egg, stirring this in as you pour it using a fork to break it up.

Remove from heat, and serve!  You can add that dash of hot sauce at the table, as well as a splash of sesame oil, if desired.

Vegetarian?  Want to make sure your soy intake is fermented for health reasons?  Shave some tempeh into thin slices, and use that instead of the squid, and sub the fish sauce with a good fermented tamari.  Hard to find, but it exists.

If you are vegan, that egg is optional anyway.  I just have a surplus of my happily raised backyard chicken gifts.

Shared at the following link parties (which will be added to, as they open)