Posted on April 30, 2019 by goatsandgreens
No, no.  I’m not chicken to BECOME a grandmother, I’ve simply seen that one of my hens has hatched her first egg into a live chick format! 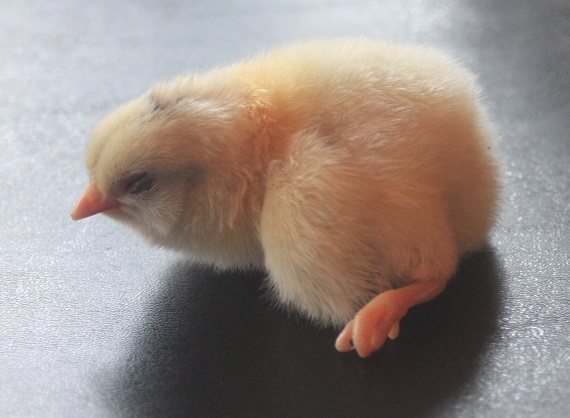 Idril’s first hatch. A Silver-Laced Wyandotte x Buff Orpington F1 about 4 hour old chick. Bits of black around the eyes, top of head, and a little on the right (unseen) wing. Otherwise, a pale buff coloration, with a whitish belly.  Will be interesting to see how the inheritance plays out.

Yes,  Idril’s first chick has hatched!   Now, Idril had gone broody about the 5th of April, but I didn’t let her keep the first eggs in her clutch, as she wasn’t staying on them.  But by the 7th, well… why not?  After all, there’s a rooster in there.

I went down around 3:30ish on April 29th to give my hens and their rooster kitchen scraps, and as I went down to the coop, a bunch of chickens were acting up and weird, making a ruckus.  Very strange.  I go around and I hear… chirping.  Baby chick chirping, which sounds like just about any small bird’s chirps.  Something hatched!

Well, the baby was somehow in the run proper, and Mama was hovering over it.  No idea how it got there – I think it was only an hour or so old – I’d heard ruckus about that time before in the afternoon and thought it was wild turkeys outside.

So anyhow Mama was only paying attention to the hatched one, far from her nesting area, and I had no clue if the chick would stay there if I put her (or him) back.  So, the Long Arm of Poultry CPS stepped in.  Mama Idril tried to peck me, but I know she only meant to care for this little one.  I do want her to care for some of her “litter”, er, clutch upon hatching, but it will drop back down to about 35 F tonight.  (Overnight being last night.)  I may consider re-introducing any chicks I need to bring indoors, but this will depend on several factors.

Idril being broody early on. I believe she was the first of my hens to lay. So far, the only to go broody. As I have a rooster, I decided to let her raise some eggs into chicks. She is a buff Orpington.

I do have separate outdoor housing I can move them to (a couple possibilities, actually), assuming weather warms a bit.  I could even put her in my basement workshop, but I think that would stress Mama Idril a lot. 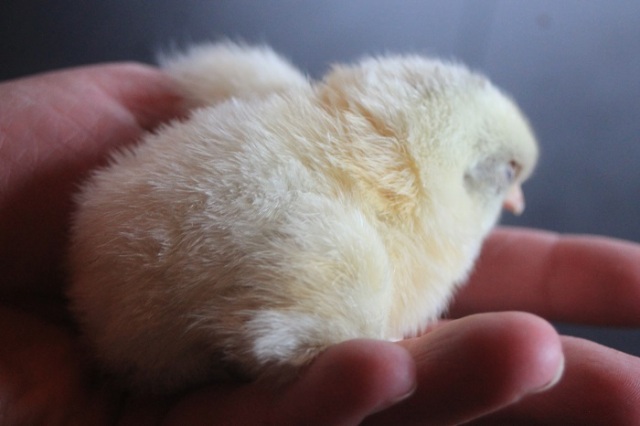 Isn’t there a saying about the “bird in hand”?

Idril’s first born is now ensconced in a temporary box in the house, with a heating unit.  So I can watch the little one, it’s upstairs with me.  It’s definitely her child, lay date marked on the egg shell of April 7.  Hopefully she’s gone back to the unhatched ones.  I discarded the broken egg shell.

She’s purdy.  (For some reason I am assuming the chick is female.  Who knows???)  Idril is a buff Orpington, and the dad is Tiny Dancer, a silver Wyandotte.  You can certainly see the buff heritage in this chick.

Earlier this year, I ordered baby cockerels from Meyer Hatchery, as dual purpose meat birds.  They are supposed to come in this week.  I may run this chick with them.  Or I may keep her separate, but give her a clutch mate or two for warmth and socialization.  My options are open, due to the timing of the Meyer chicks.   At any rate, she (?) should not be kept in solitary any longer than I have to do it.

The chick appears lighter in coloration in this photo than she/he really is. This chick is very vibrant.

However, I’m wondering how the newborn got out and down to the run to begin with.  About five days ago my Fake Egg ended up down in the run as well, which it certainly didn’t do on its own.  (The Fake Egg was one of a pair of ceramic eggs I bought in the early days to encourage the hens to lay in the nesting boxes.  Those never moved from the nesting boxes I’d put them in… until the day I discovered the one down in the run.  It didn’t get there by itself…)

Next Morning (today, April 30th):  It’s nearly 7 am.  The little one seems to have trouble with one leg.  Doesn’t want to stand.  She didn’t stand yesterday but I was considering that her newly hatched status.  Well, time and attention will tell.

She’ll get her first food and water today.

Presumably more chicks will hatch today, and she’ll have company.  (Besides that, the shipment from Meyer’s is due one of these three days.

The foodie me: Low/no gluten, low sugars, lots of ethnic variety of foods. Seafood, offal, veggies. Farmers' markets. Cooking from scratch, and largely local. The "future" me: I've now moved to my new home in rural western Massachusetts. I am raising chickens (for meat and for eggs) and planning for guinea fowl, Shetland sheep, and probably goats and/or alpaca. Possibly feeder pigs. Raising veggies and going solar.
View all posts by goatsandgreens →
This entry was posted in Cooking and tagged chickens, homesteading, newborn chick, Poultry, Wyandotte x Orpington cross. Bookmark the permalink.

14 Responses to I’m a Chicken Grandma!