Skillet Mac and Cheese with Veggies

Posted on November 21, 2016 by goatsandgreens

For many in America, mac & cheese is “comfort food”.

We didn’t grow up with it as such, which is why I usually put the word “comfort” into quotes.  One man’s comfort is another’s discomfort…

When we did have it, it was something the parents quickly prepared from a box and baked (they did add more cheese) prior to going out and leaving us at home with the sitter.  This could be a desirable outcome, but it all depended on the identity of said sitter.  It certainly wasn’t a “sit around the table and enjoy together” meal.

I don’t think I’ve ever had a really enjoyable baked or casserole mac and cheese, even when made from scratch — excepting the lobster mac and cheese my brother once made, but that was because that dish was very top-heavy on the lobster!    (If I remember correctly, there were also some tasty and complementary veggies in the mix, too.  Bell peppers, I think.)

I finally ran into a skillet mac and cheeese, at work of all places.  The cafeteria was serving to-order skillet mac and cheese — the noodles already prepared and still a bit au dente, and you’d get up to four types of cheese, and a variety of veggies, and some voluntary hot pepper flakes to add atop the finished product.  I think one of the reasons I liked it was for a similar reason to liking my brother’s mac and cheese — it’s not just noodles and cheese!  In this case there are some good, tasty veggies in place!  And no added bread crumbs (starch added to starch… really?).  So anyhow, for me the skillet is the way to go.

This was so good I actually re-created this a couple times with some wheat-based pasta someone dropped off for me while my ankle was broken.   Now, I am making it again, with a few adaptations (they didn’t use sherry at work) in gluten-free mode for this blog.

It’s very rich — it’s not for every day dining.  And I can’t think of a good short cut for vegan meals, as you really need the meltiness of real cheese.  (There is now a pea-based cheese substitute, so for those who don’t do soy, look into that — but I doubt it is “easy” to make that melty and exciting, especially without excipients.) 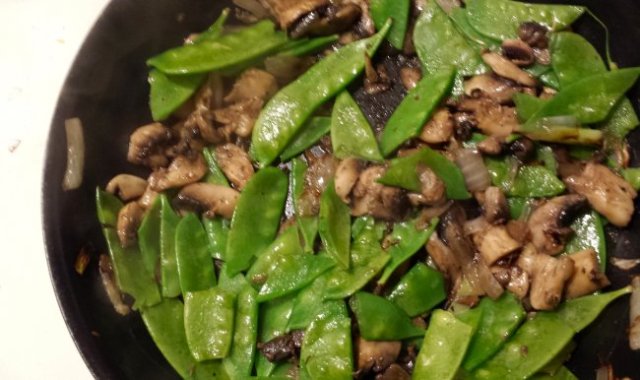 Plus shrooms and snow peas…

I also don’t recommend fat-free or reduced-fat cheeses as any number of other excipients and sugars are added to those for “mouth-feel” (1% fat milk is not 1% of whole milk, after all — whole milk is 3.5% fat)!  As for pre-shredded cheeses — they add anti-caking stuff to that — pull out the kitchen tool and do it yourself.  The extra work will help keep you from deciding to make this every night!  You could shred it, but laying into the cheese with a knife is quicker and works just as well.

And, plus sherry and cheese…

Except for the optional red pepper flakes, this recipe is nightshade-free.  Leave them off, if you desire.  The sherry can be omitted, too – sub in an equal amount of low sodium vegetable broth.

For the pasta I chose a type made from chickpeas — black bean pasta would also work, or a rice-based noodle.  Follow the package directions, and note that for bean-based pasta, the moment you go from au dente to very soft is much quicker than with wheat-based pasta.

Prep time:  10-15 minutes
Cook time:  around 15 minutes, depending on level of onion browning
Rest time: Not needed.
Serves:  2-3 as a main.  5 as a side.
Leftover friendly:  Store in microwaveable container in fridge.
(It is likely you can also re-heat in oven in appropriate container.)
Suggested side:  Tossed salad drizzled with a homemade unsweetened vinaigrette.

Skillet Mac and Cheese with Veggies

Prep all the veggies, and get some water ready for the pasta.

In a medium large skillet, heat up the oil, and add the onions.  Cook them to at least translucent — you can continue the process until they are well-caramelized, if you wish.

Add in the mushrooms (they will soak up the oil, which is why I start with that much).  Cook until done.

Start the pasta water to boil, and add the snow peas to the skillet, along with the salt and pepper, and stir, about one minute.

Don’t overcook the snow peas — add in the sherry (or veggie broth), and then the cheese.

When the water boils in the pot, add the pasta to the pot, and cook ON THE AU DENTE SIDE as per box directions.

Stir the skillet ingredients, reducing heat to a simmer so that you don’t overcook the snow peas or scald the cheese.  Make sure everything melts.  Add the tarragon and the optional red pepper flakes.

Drain the cooked pasta and flip it into the skillet, and continue stirring until everything is mixed appropriately.

Plate and serve, or let folks serve themselves.

For four people (as a main), size up accordingly, and use that LARGE skillet!

Instead of snowpeas or mushrooms, there is a whole world of other veggies to explore in this dish.  Of course, different veggies will require different cooking times.  Frankly, adding veggies is a highlight to mac and cheese, turning a pedestrian dish into a delight.  Ideas:  Bell peppers of various colors, broccoli, broccolini, shaved Brussels sprouts, slivers of golden beets. asparagus… we could go on…  Oh, and onions could be replaced by leeks…

Visit the Link Party at Fiesta Friday!  Hosts are:  Linda and Jhuls.

5 Responses to Skillet Mac and Cheese with Veggies