Okay, I LOVE okra.  I got a pound of it at my farmer’ market ten days ago, and another pound this past weekend.

This stuff is FRESH!  It will last a lot better and longer than the okra I see at my supermarket, which at least here, is already shot and inedible. 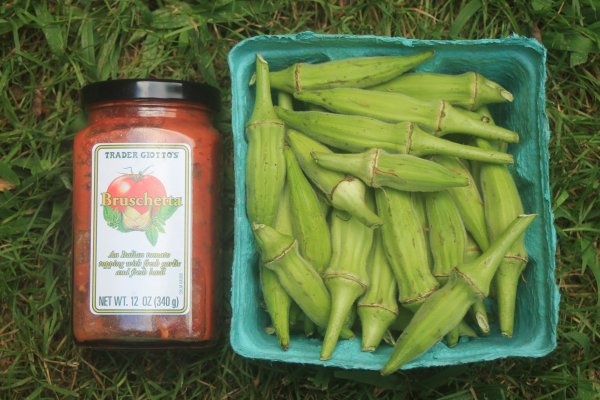 Fresh from the farmer’s market to me…

Soaking it in vinegar and salt, and then rinsing vigorously, is supposed to make okra less “slimy”.  I’m fine with okra in any form, but I decided to try the soaking method for this recipe, to help my readers out.

If you are interested, I also have a recent vegetarian okra recipe done Indian style. 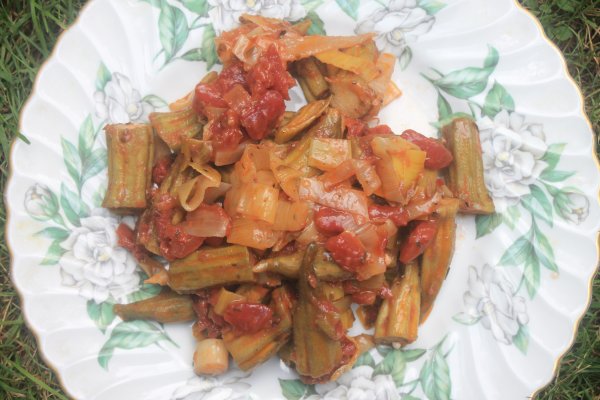 The Okra:  Cut off and discard the stems.  (Remove tips if they look brown.)  Cut the larger okra into half.  Soak the okra in the salt and vinegar for about an hour.  During that time, a couple of times, move the okra around in that bowl so as much can be absorbed as possible.  This is the stage that should draw out a lot of the slime that many object to.  At the end of the hour, rinse the okra vigorously in a colander, under cold water.  Again and again.  Yes, it will still feel slimy to the touch.  After cooking, a lot of this goes away, but I cannot promise 100% to you.  (I still love the stuff…)

Add the okra, the bruscetta, and the rest of the spices…

Simmer on the cook top for about 40-45 minutes under low-moderate heat, covered loosely to allow a little steam to escape.

If you want to be a bit more Greek, add a small handful of pitted olives now.

Optionally, add a few sprigs of cilantro as you are about to serve.

SUBSTITUTING FOR THE TJ BRUSCETTA:

Yet another Link party at Fiesta Friday!… 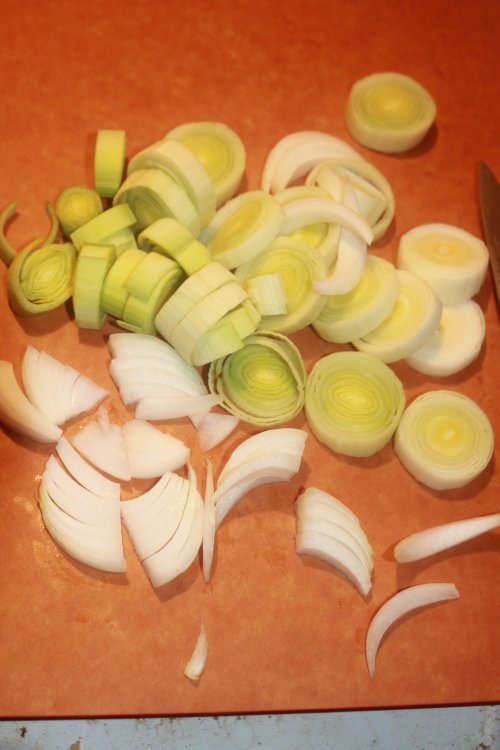 Leeks and Onion, ready to cook

The foodie me: Low/no gluten, low sugars, lots of ethnic variety of foods. Seafood, offal, veggies. Farmers' markets. Cooking from scratch, and largely local. The "future" me: I've now moved to my new home in rural western Massachusetts. I am raising chickens (for meat and for eggs) and planning for guinea fowl, Shetland sheep, and probably goats and/or alpaca. Possibly feeder pigs. Raising veggies and going solar.
View all posts by goatsandgreens →
This entry was posted in Cooking, Vegan, Vegetarian and tagged Leeks, Mediterranean, Okra, Onions, Recipe. Bookmark the permalink.