Posted on March 4, 2015 by goatsandgreens 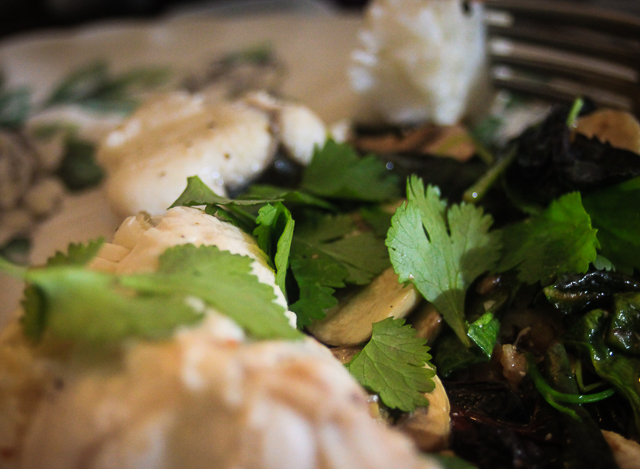 Monkfish is a rather homely (to us — they probably look just fine to each other) denizen of the North Atlantic and the Mediterranean.  It allegedly tastes like,  and has the texture of, lobster tail.  I can see the resemblance, but it’s not a fully convincing substitute.  And, actually, most of the fish doesn’t end up available for human consumption — it’s just the tail.  I assume the rest of it gets ground up for feeding at fish farms, or maybe for your pet’s dinner.  I suspect without proof that the rest of the fish may be rather bony.  It’s not something I will buy very often, but the fact that this particular fish was caught locally bent the scales (as it were) here.

Usually when I do make this, I bake it in the oven.  I decided to try pan-frying it.  It wasn’t going to cook completely through in a skillet, so I cut pieces to thicknesses of one inch or less.  The tip of the tail, and then monkfish “steaks”.

These actually all fit in that skillet!

Recipe:  (The fish makes two servings – it generates a lot of liquid upon cooking.)

* For garnish:  fresh cilantro; juice from the reserved slice of lemon or lime mentioned above.

Marinate the fish in the black pepper and lemon/lime juice for about 10-15 minutes.

Get your oil to sizzling hot in your skillet — then add the fish, layer it around the skillet so that all pieces are cooking, and add the red pepper flakes if you are so inclined.

Reduce heat to medium low, and cook on each side for 4-5 minutes a side.

Flip back to first side for approximately another 30 seconds, and then remove fish but not liquid.   Tent the fish under foil, and let it rest.

Add the mushrooms to the skillet, and some more cracked ground pepper.  There will be a lot of water from the monkfish when you cook; this is where the simmer part comes in.  When they begin to get that shiny “cooking” look on their outsides, add in the greens.  (If you are using older cooking greens — ie, mature Swiss chard or the stems from bok choy, add those in when you first add the mushrooms.)  For the baby greens I used, 3 minutes of skillet time was sufficient.  Otherwise this may take 5-8 minutes.

When the greens are wilted, plate the greens and mushrooms without the excess liquid.  Add the monkfish.

Garnish with a squeeze of lemon (or lime) and with the optional cilantro.

If you use a lot of greens, do use a larger skillet! (These were the only greens I had left in the fridge on this occasion due to long and involved reasons — personally I’d have preferred more.)  Notice all the juices from the monkfish!

An optional variation for an Asian flavor:  use sesame oil (toasted or untoasted), and add in about a teaspoon of freshly shaved ginger root and upon serving, a splash of tamari sauce (I am partial to San-J’s gluten-free low-sodium tamari/soy sauce, as it is delicate enough for seafood), or a Thai fish sauce.  In such a case, bok choy would be an excellent green to cook with the fish.

Just about ready to eat!  (Two bites in, I remembered I’d left out the cilantro.  Can’t do that!  Added it – check top photo!!)

PS, the other serving of fish I made was eaten cold, later, on the road.  This really saves on having to decide between Drunken Donuts and Mac’s Steak House, especially since I do NOT like trail mix, and the nuts in trail mix don’t particularly like me.  Nor do I like the “food” at either of those two establishments.

(This recipe was made back in 2014.  Time Machine drifting back through old drafts on WordPress…)