Posted on November 4, 2014 by goatsandgreens

Hmm, this is the first time I’ve baked (as in the dessert category) anything since at least June 3, 2011, which was when I posted that last endeavor, a squash and blueberry muffin, made with almond meal instead of grains. I bake things in the dessert category that they all seem to get onto the blog!  (I usually don’t get around to posting the day I make a recipe.)  I know I have not cooked a standard dessert/baked pastry snack since then until now.  Well, actually three weeks ago — lag time! 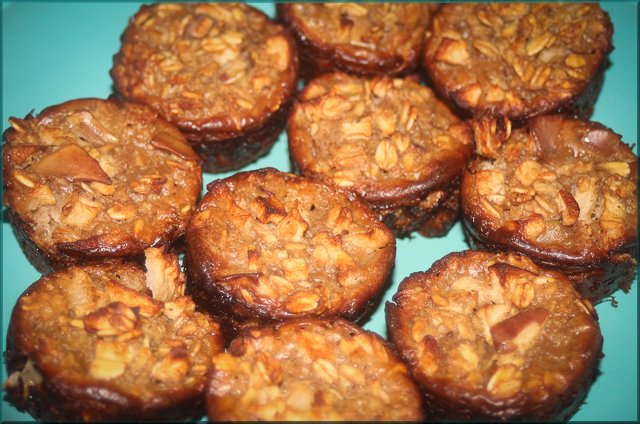 This recipe is made with grains (oatmeal), but I was careful to source gluten-free oatmeal since at least one of the potential consumers has a definite gluten problem — via Bob’s Red Mill brand (they carry both gluten-free and regular, so if this is important, read the label).  I am currently having problems digesting tree nuts, so almond meal is out for now.  Besides, there’s something satisfying about the texture of oatmeal flakes.

At a certain point after starting this blog, I decided everything I cooked and posted would at the very least, be with the option of gluten-free.  (This does not hold true with the initial posts!)  But even before this blog went gluten-free, I personally went nearly dessert-free except for a few scattered occasions when served by others, or, yes, confronted by my true weakness, ice cream.  I simply lack a fully developed sweet-tooth, and this has NOT been a hardship in my home life.  I don’t miss it, if I have satiating other food to eat.  In the winter, about every third week, I eat a bowl of rolled or steel-cut oats as cereal (NEVER THAT NASTY INSTANT STUFF!)  with a little milk and maybe a pat of butter on top.  (Grandmother used to put a bit of pastured milk on top.)  Okay, yes, a small splash of real maple syrup simply for the flavor, not the rather nasty Aunt Jemima that you frequently find.

But then, yes, there are bake sales, and occasions where I might be requested to make a “sweet”.  And I do have a batch of that leftover coconut palm sugar from that Pad Thai excursion a few weeks ago —  I don’t know what else I will do with it, other than another Pad Thai, but in the interim…  there’s this birthday party for someone who will really appreciate home baking!

Anyhow, here I present you with…

Ready for the oven

•2 cups whole milk.  I used pasteurized whole creamline milk – not homogenized – from Kimberly Farm, New Milford, CT.  There was just enough of a taste left, for me to know this is awesome milk!  (Seriously, though, whichever milk you wish!  I like that you can buy this one in pint sized containers.)
•1/4 cup unsweetened applesauce (I used my home-canned Gravenstein applesauce from 2013)
•2 large chicken eggs (pastured and procured from a reliable farmer’s market source was my option).
•2 apples, cored and cut into very small pieces.  (These were Cortlands, but your preference or availability may vary.  Skin may stay on.)
•If you prefer, use one apple and 1/4-1/2 cup of raisins, but personally, I don’t prefer.  It’s that lack of a true sweet-tooth thang on my part.  Put bluntly:  raisins are way too sweet for me.  (Grapes are better reserved for wine…)

Mix all the dry stuff together in a large bowl.

Mix all the wet stuff together.

Add the wet stuff to the dry stuff, and blend using a large spoon.   The result looks very watery and you’ll wonder how this will turn out.  It will… 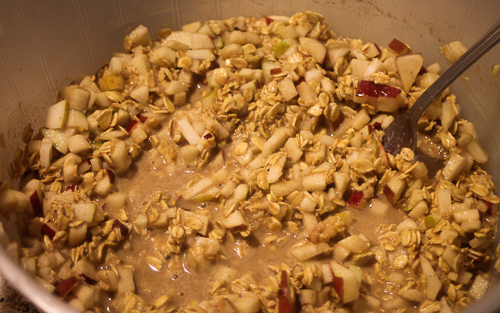 Looks rather liquid before cooking

Add to lightly oiled mini-muffin pans, you can fill nearly to the top, as they don’t rise much.

Bake for 20-25 minutes.  Check that they are turning brown and not burning.  (Unfortunately, ovens vary.)  Remove from oven, place on a rack and allow to cool for at least 15 minutes before removing them.  Otherwise they are likely to crumble.

Makes 35-40 mini-muffins.  They got great reviews at the party, although for some folks they weren’t “sweet” enough!

The foodie me: Low/no gluten, low sugars, lots of ethnic variety of foods. Seafood, offal, veggies. Farmers' markets. Cooking from scratch, and largely local. The "future" me: I've now moved to my new home in rural western Massachusetts. I am raising chickens (for meat and for eggs) and planning for guinea fowl, Shetland sheep, and probably goats and/or alpaca. Possibly feeder pigs. Raising veggies and going solar.
View all posts by goatsandgreens →
This entry was posted in Baked Goods, Cooking and tagged apple, Gluten-Free, Mini-Muffins, Muffins, Oatmeal. Bookmark the permalink.