Posted on October 4, 2014 by goatsandgreens

Foodie News is going to be a once-a-month (sometimes less if there’s nothing out there that strikes my fancy to point you at or talk about) feature here.  It won’t show up more often than that.

Kale and wild raspberries (which may possibly be wild red blackberries) were my only star food producers in my garden this year. Sigh.

And from the article, it appears that veggie-haters are super sensitive, genetically, to bitter, and while they will definitely shy away from brussels sprouts, they also tend to avoid veggies all together.  My own taste buds appear to be in the moderate area — I hated brussels sprouts as a child, but that may be because the only way I ever saw them then was boiled, and probably not fresh.  Now that I’ve experienced roasted brussels sprouts — I’m quite happy dining on them!  The article mentions that roasting them cuts a lot of the bitterness.

I wonder once more of the genetics of taste are explored — they’ll find the gene that predispositions one towards savory over sugary, which if it does exist, I certainly own.  Or the gene that enables the inability to perceive stevia as anything remotely resembling “sweet”, or even edible.  If there’s a gene for that, I’ve got that, unfortunately.

Two major power outages a few years ago (Hurricane Irene and the Halloween Snowmaggedeon) made me happy that the eggs I had on hand had been purchased at farmer’s markets and had not been refrigerated.  One less item to triage!  Of course, by the time the Snowmaggedeon power outage event was over, the house temperature was about 40 F.  Having camping as a hobby helped me out tremendously.  And actually, we already KNEW about this. 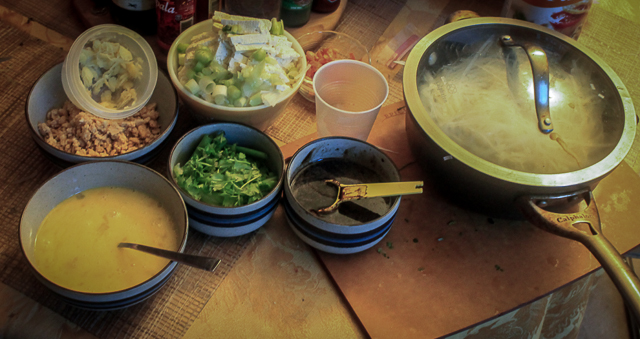 Most of my Pad Thai mis en place

The Thai government wants to ensure that Thai recipes served in restaurants are authentic. So, you see, they invented this tasting robot that can tell them, yes or no.   Pad Thai, no doubt because the item contains the country’s name, was one of the first things entered into the database.  Never mind that in Thailand there is not just ONE single recipe for Pad Thai.  I don’t know if or how they get around that hurdle.   I’m pretty sure my posted Pad Thai recipe would pass muster if I ditched the pork in favor of chicken or shrimp — but then again, maybe they’d want more palm sugar than I was wanting to use!  No, I am NOT sorry.

CeeCee guards the trash she can no longer access…And no, she still has no interest in coffee beans!

Nope, I don’t really want to  believe people will pay big bucks for coffee beans that have traversed the digestive tract of an Asian variety of civet, to be collected for grinding from the poop.  Supposedly, this “mellows” the coffee beans.  At any rate, I will try nearly any food once, barring for certain those food sources on endangered species lists, or TVP-laden garbage — but I certainly balk at civet-processed coffee.

The intrepid researchers in this article have created a coffee that is similar enough (they say) to civet-processed coffee, without the use of civets.  A good thing, as currently there are nasty CAFO civet farms in parts of southeast Asian, where the poor animals are tightly-caged and force-fed something they’d not want to eat naturally.  (Who’d have thunk this was such a prime idea that you’d need to CAFO the animals??)  Plus, with the new coffee you also get the benefit of beans that have not been intimately associated with fecal material.  Naturally, I don’t know who they bribed to do the taste-test comparisons!

Since civets are said to be cat-like, and are definitely obligate carnivores, I exposed my own housebound and domesticated cats to some of my coffee beans (admittedly already processed before being purchased from Trader Joe’s — the current container is TJ’s Fair Trade French Roast).  They were not remotely interested, and removed themselves rather rapidly from the aroma, or from what they would probably tell me is a stench if their vocabulary was up to the interest or effort…

At any rate, the best way to get a cat or a civet to eat a coffee bean would be to embed it into hamburger or wet cat-food (this actually works for pilling cats with medicine…)  The best way to get this particular human to eat the old-fashioned civet-processed coffee, once only, is a payment in advance of around half a million bucks.

(PS – no, cats and civets are not related, they are both in different Families of mammals.  But both are obligate carnivores. Which makes me wonder how someone in some previous generation discovered that civet-processed coffee beans was an idea to pursue?)

http://www.clovegarden.com/news/110417.html     Overall, Asian cuisine prefers the dark meat of chicken, and overall, Americans claim to prefer the breast. What gives?  (Yes, I am an outlier…)

Two pairs of pastured chicken legs, still thawing. Thigh and leg.  They will be grilled.

Wow, Americans are finally beginning to appreciate the virtues of dark meat chicken!  Gimme that ole-time chicken thigh!  Skin on, skin off — it all depends on the recipe.  And, frankly, on how the chicken was raised.  Interesting insights on how we in this country might be beginning to consider different perspectives.  Ummm… although now that the word is spreading, the price for delicious nutritious dark meat will surely rise…

Yes, everyone, stick with chicken breast, you love it, you do!

(PS, the clovegarden site also has an amazing breakdown of cuts of pork.  I’ve not had the chance to explore more there yet.)

The foodie me: Low/no gluten, low sugars, lots of ethnic variety of foods. Seafood, offal, veggies. Farmers' markets. Cooking from scratch, and largely local. The "future" me: I've now moved to my new home in rural western Massachusetts. I am raising chickens (for meat and for eggs) and planning for guinea fowl, Shetland sheep, and probably goats and/or alpaca. Possibly feeder pigs. Raising veggies and going solar.
View all posts by goatsandgreens →
This entry was posted in Commentary and tagged Bitter, Civet Coffee, Foodie News, refrigerated eggs, Robot Tasters. Bookmark the permalink.