Pork Carnitas (for a pot-luck crowd)

I love many varieties of “ethnic” foods, and enjoy attempting to re-create some of these in my own kitchen.  I’ve focused more on Asian and Mediterranean, and less on south of the (my) border, but I love Mexican, Peruvian and Brazilian as well.

So anyhow, for a local pot luck, I signed up to make pork carnitas — which would be one of several things stuffed into, say, soft tacos or taco shells, that other people would provide.  You can also turn this into a lettuce wrap, which would be my preference.  Or, you could eat this straight up if you are so inclined…

Warning:  This is NOT going to be quick and easy!!

This is the blog post recipe I more or less followed, from The Yummy Life:

Rub down your meat with either seasoned salt, or with a mixture of salt, Aleppo ground chili and ground pepper. Let sit a few minutes.

Heat your skillet or Dutch oven to a medium high, add the oil.  Wait a couple more minutes, then add the meat.  I used the divided portion concept – half of the meat was browned; then the other half.  Brown the meat on each side — including edges — about 4 minutes each side.  As you go along, the meat will more readily brown, due to the residues in the skillet, and so some sides may take less time.  Set aside when done.

Add all the meat to the crock pot,  and use the veggie broth to de-glaze your skillet or Dutch oven, pouring all this over into the crock pot when done.

Top off the crock pot with all the other ingredients except the three spices at the end.  (Sigh when your jar of salsa verde isn’t quite 2 cups worth!)  It will do.

Set the crock pot to cook on HIGH, for 4 hours.  If you have smaller chucks of meat, you can check it at 3.5 hours.  Meat should be tender and fall apart, without shredding up entirely.  (Some of that will happen later…)  At any rate, if you want to run this on LOW, you can use 8 hours, but be forewarned that doing this while you go off to work has to take into account your commute time, your lunch time and your traffic and errands going home time, which for me turns this into about 10 or so hours, rendering the pork obnoxious…  Alas.)

At the end of the crock pot stage, prior to shredding and then de-fatting (in the fridge overnight)

Break and roughly shred up the meat using two forks, and discard any bones. Return to the liquid, and allow to cool to a fridge-friendly temperature.  Refrigerate overnight, and remove and discard that crusty fat which forms at top before proceeding further.

(You CAN take a whole day to make this meal (using a de-greaser) and serve it that night, but since I knew what the day of the pot luck was going to be like in my life, I opted to do the above about three weeks in advance — and yes, there was also out-of-town/vacation time to consider in between.  So, I picked a weekend where I could crock pot, and then refrigerate it overnight, remove and discard the fat, and then freeze the rest.  Obviously, your needs will differ.)

Back to the meat — place it in a baking dish, and to this you want to add about 3 cups of the de-fatted liquid, which appeared to be just about what I had, so I added it all back to the meat.  I also added in the coriander, cumin and paprika, and mixed it up with a spoon.

Bake at 300 F for 30 minutes, pull from oven, and mix it up.  Return to oven and repeat, pulling it back out at 15-20 minute intervals hereafter to mix again.  What you are trying to do is cook off the extra water, concentrating the flavors, but without drying out the meat (hence the mixing).  Do this for as long as it takes to get to a consistency you like.   This may take a couple of hours or so.  I like a little liquid to remain; dry carnitas are not to my liking, although you can certainly find them at restaurants. 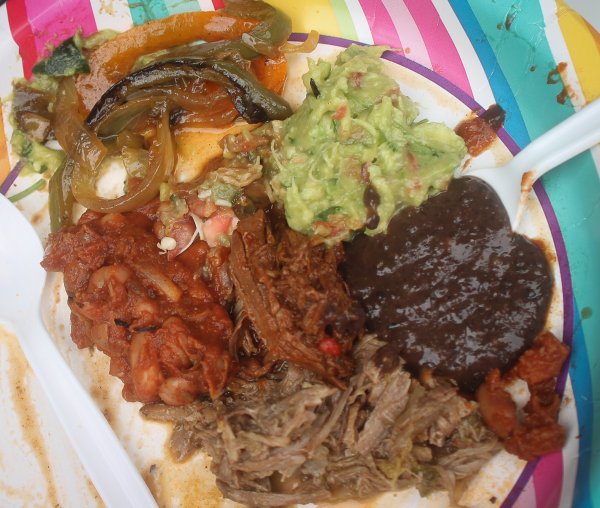 Back for seconds… the pork carnitas are at the bottom. Everything was SOOoooo tasty!

Eat them straight up, make lettuce “taco shells”.  Another attendee at the potluck supplied optional hard and soft taco shells of the traditional corn variety.  There were lots of cooked dishes and various Mexican condiments (and Margaritas), too.

http://www.theyummylife.com/carnitas_shredded_pork — for the bulk of the recipe; I did vary out on the cut of pork to something more nutritionally dense and flavorful, and the oil source, and the broth source; and went with pink Himalayan salt over the ambiguous “seasoned” salt.

http://paleofoodiekitchen.com/2013/04/slow-cooker-carnitas/ — for the three spices added in last in the process.  It just didn’t seem “Mexican” enough without them.

The foodie me: Low/no gluten, low sugars, lots of ethnic variety of foods. Seafood, offal, veggies. Farmers' markets. Cooking from scratch, and largely local. The "future" me: I've now moved to my new home in rural western Massachusetts. I am raising chickens (for meat and for eggs) and planning for guinea fowl, Shetland sheep, and probably goats and/or alpaca. Possibly feeder pigs. Raising veggies and going solar.
View all posts by goatsandgreens →
This entry was posted in Cooking, Meats, South of the Border and tagged carnitas, Mexican, Pork. Bookmark the permalink.