Going home from Virginia (which post is coming shortly, I promise!), I stopped at Dietrich’s, a Pennsylvania-Dutch meat place that’s a must-see for omnivores and carnivores who happen along Route 78.

Alas with the iPod touch one can't read the writing. It DOES say Cleaned Brains in that list somewhere

Yes, as the sign says, they really DO carry “cleaned brains” in their freezer section.  Dad used to serve us brain salad when I was young, complete with a vinaigrette, capers, bits of onion and ground pepper, but these days with that mad cow thing, I steer away from brain.  It’s probably fine, but I’ve done my lifetime indulgence in it.  Over the years, I’ve seen meat from items such as guinea fowl, buffalo, frogs, deer,  and who knows what I’ve forgotten in their freezer section.  I did indulge in some lamb hearts but I’ll spare you — I already ate them, sans photography.  (No, I don’t record every meal I eat!  If you want to know, they were prepared similarly to a beef heart recipe recently depicted here; there was just far less of it!)

I did pick up their excellent horseradish cheese with bacon.  They also provide this without bacon, also excellent.  Their mustards are excellent, as well.  I picked up a little pepperoni to freeze, so I can create some home-made pizza down the road.

But the main reason I mention them (besides being an oasis for food if you hate those ubiquitous fast food chains — you can get sandwiches to go with various sausages and such, all well-seasoned, or you can get, as I did, a hunk of seasoned sausage, fully cooked, to eat without extraneous carbs while driving. They have little samples of most everything in their deli section (not frozen), with toothpicks you can stab said victims with) is that I wanted smoked ham hocks.

More shopping, and farmers markets:  (Yes, we are getting to the collards!)

This past Saturday, two markets.  Bethel, CT, an old standby.  Among other things, I bought a clump of collards for $3.   The Bethel market this weekend featured four vegetable stands, all vibrant with variety, and in most cases not duplicating.  They also had a stand for baked goods and another for soaps.

There’s another, and new, farmer’s market in Danbury, CT, in the parking lot at the Danbury Fair Mall.  I guess they opened a week or two ago.  This was my first visit.  Here, they undercut veggie prices, and so I bought a lot more  (but someone has the nerve to sell eggs at $6/dozen.  Raised eyebrows — this is far far more than they sell them at the health food store, where you expect this, with the serious merchant markup!)  I didn’t count the veggie stands but there were at least seven or eight.  May have been more.  It’s the Mall that draws them in to this parking lot, I fear.  Bought collard greens for $2.00 — it was a just slightly smaller bunch than the Bethel market one, but it was cleaner, too.

Collard greens:  a food of the deep South

I was born in Louisville, Kentucky, but other than okra, I wasn’t raised on Southern cooking.  As soon as my parents discovered crispy veggies, it was all over, except when we cooked spinach.  And I admit, I much prefer crispy, vitamin-rich vegetables myself.  I didn’t grow up with collards, grits or black eyed peas.  They did do Virginia ham (which I always thought tasted like meat gone bad, and unfortunately, I still do).  I loved my Grandmother’s grit casserole:  she cooked it up as a nighttime dish with cheese, and it remains a great memory.  Traveling down South while in college, I made the mistake of ordering a side of grits with breakfast at a diner.  With Grandmother’s memory of this dish to heart, I was derailed as seriously as when I tried to eat a plate of (hot house) tomatoes from the salad bar when first arriving in college.  Both were pure EVIL.

Anyhow, I digress, even if happily.

I discovered Collard Greens when I went to a wedding shower at someone’s home back in the mid-90’s.

The sister of the bride-to-be had cooked the foods.  I found myself going back once, twice, thrice, for additional helpings on her collard greens.  Nothing else entranced me as much as this.  I’d never even heard of this vegetable before this night.  It was a discovery, this vegetable and its preparation.  A slightly acidic taste, a bit of heat, small fragments of fragrant meat, and lots of these greens.

I’m a quiet sort of person (which my friend’s sister would not have known, since that was the only time I ever met her), but she kept looking at me in amazement of some sort, when I inquired after the recipe more than once, entirely serious.

Anyhow, once I discovered this poor country Southerner’s dish, I was hooked.

1 small ham hock, smoked
2 bunches collard greens, cleaned, broken roughly into chunks.  Chop the stems into bite size portions, something I neglected to do this time round.
1/2 large onion, chunked
Water and apple cider vinegar:  I use 1 part vinegar to 3 parts water, but I’m a noted sourpuss — adapt as desired  — try it with half the vinegar first go-round!
Ground black pepper
Red pepper flakes (or hit it up with a little bit of Tabasco).  You want this to be a tang to the taste, not remotely near any sort of fireball explosion in your mouth.

Recommended step (which I didn’t do this time, I will the next) brown the ham hock in about 1/2 teaspoon oil (olive or coconut are suggested).  Up to two minutes a side on moderate heat.  As a side note, I once made this dish with smoked turkey leg instead of the ham hock, that was good too.

Throw everything except the red pepper flakes into the pot. 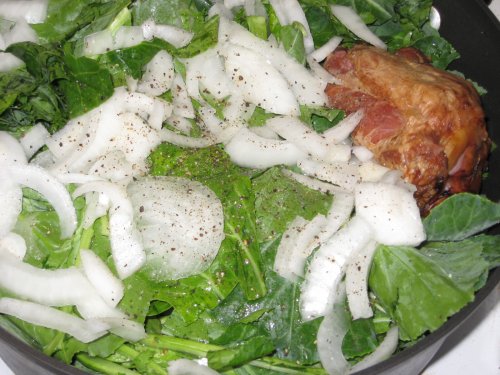 Bring to a boil, then reduce to a simmer and cover.

Simmer for 1.5 – 2 hours, until the meat begins falling off the bone.  Add the red pepper flakes (or Tobasco) and simmer another fifteen.  Do make sure your dish isn’t running short of liquid — add more water as necessary.  (This is not a great dish to make during a heat wave — we had a small spell of chillier weather…)

When cool enough to handle, simply shred up the meat, pulling it all off the bone, which you will discard.  Mix all of this together, drain off any excess liquid, and serve.   Will make 4-5 servings as a main course.  And, I always make it as a main course.

Gnosh.  I dote on this dish!   PS:  the spell check here accepts collard greens, but NOT collards.  Go figure.

The foodie me: Low/no gluten, low sugars, lots of ethnic variety of foods. Seafood, offal, veggies. Farmers' markets. Cooking from scratch, and largely local. The "future" me: I've now moved to my new home in rural western Massachusetts. I am raising chickens (for meat and for eggs) and planning for guinea fowl, Shetland sheep, and probably goats and/or alpaca. Possibly feeder pigs. Raising veggies and going solar.
View all posts by goatsandgreens →
This entry was posted in Commentary, Cooking, Southern Hospitality. Bookmark the permalink.
Loading Comments...
%d bloggers like this: