Posted on January 2, 2011 by goatsandgreens

Back in November a compatriot shot a couple of squirrels, which he kindly cleaned and gave to me. The smaller one I baked for about an hour at 350 F, with a little marinate (Ponzu sauce, a little white wine, and some herbs).    It was perfect, but I ended up not taking any photos.  What was less than perfect was that when I went to cut the larger squirrel up for the freezer, I did a number on my index finger, over which I debated pros and cons of the ER.  Fortunately it stopped bleeding about the time I was going to have to get my chin up and get there.

Baked squirrel is very tender (at least when small and/or well marinated with liquids), sort of a dark meat lean thing going on.  I rate this dish 5 out of 5 (minus the finger incident, which didn’t really involve that squirrel at all). 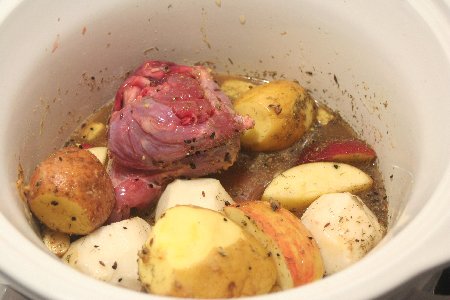 I decided to crock-pot the larger squirrel, when I finally (about a month later) decided to extract my vengeance on him.  We can call him “Rocky”, as in Rocky and Bullwinkle.  I’m given to understand that the older (larger?) the squirrel, the more it is a good idea to stew or crock pot them.  The recipe I saw said to crock pot for six hours on low; I did it for five, and I think I could have stopped sooner.  Rocky had an abundance of root veggies and apples along with him for the ride, as well as a good portion of one of those boxed veggie broth mixes, water and Worchester sauce, and whatever herbs I was in the mood for at the time.  (This was shortly before the holidays and I didn’t have a lot of time to record things.)  I had three or four meals off of him and his veggies:  after the first one I deboned what remained, and brought him to work for lunch.  For an amazement, no one asked what I was eating!

And yes, I know, a professional photographer would have wiped out the splatter in the edges of the crock pot before taking the shot.

I find it interesting that many people would run from a room rather than eat squirrel, and yet go over and wolf down a hot dog or a commercial hamburger (remember that the commercial burgers, not, say, the one where you know the butcher who grinds it) have bits of hundreds of cattle in various stages of health in them.  And not necessarily the nice bits either.  In fact, probably not:  besides not being the nice bits, commercial burger is usually the burial ground of ancient dairy cows and some bovine pulp that is often pre-treated with ammonia.  These squirrels lived free range in full senses of the word.  No regrets.

The foodie me: Low/no gluten, low sugars, lots of ethnic variety of foods. Seafood, offal, veggies. Farmers' markets. Cooking from scratch, and largely local. The "future" me: I've now moved to my new home in rural western Massachusetts. I am raising chickens (for meat and for eggs) and planning for guinea fowl, Shetland sheep, and probably goats and/or alpaca. Possibly feeder pigs. Raising veggies and going solar.
View all posts by goatsandgreens →
This entry was posted in Commentary and tagged Squirrel. Bookmark the permalink.