Posted on October 17, 2010 by goatsandgreens

I meant to post this awhile ago but got busy in real life (yes, I have one, and it doesn’t just involve food… well, not always.)

I love making homemade soups.  I’ve been loving making seafood soups ever since last summer when we caught ourselves a mess of trout and crappies down in Virginia.  Anyhow this time I planned to make a stock, which would be strained and stored, but I ended up not doing so.  Couldn’t see wasting good particulate matter.

First, I started with steaming the mussels, about half a bag from Costco.  I poured them through a colander, reserving the liquid, and letting sediment settle out, before returning the good sediment-free liquid to the pot. 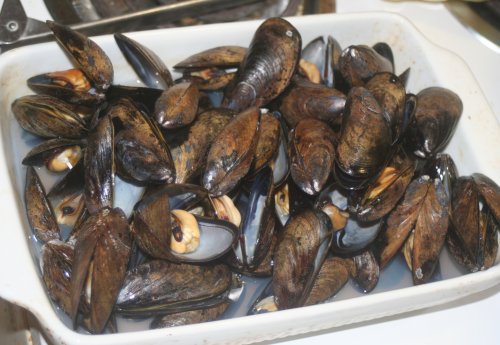 Collected all the nice morsels of mussel from the shells and reserved them (I think I snacked on one or two).

I’d gotten some salmon fish bones from the Atlantic Market — they’d taken the fillets and what was left was bone and the good meat between the bones.  $1.54, good deal.  I also bought a red snapper there, filleted that myself, badly by the way (for a future meal), and reserved the bones for the stock.  By the way, you can see I also reserved the head.  It’s hiding there.  Waste not, want not.

Brought the mussel stock back up to simmering, and added in the salmon and red snapper bones for about ten minutes.   At that point I fished the bones and meat out, separated the bones from the meat, put the bones and cartilagenous material back into the broth, along with some onion, some Trader Joe’s vegetable broth, a bit of hot pepper (without seeds this time), and let it simmer away.  I suddenly decided a little miso would be good in there, so I added a heaping spoonful to some water, mixed that up, and dropped it in .

Everything simmered for about fourty – fifty minutes, then I strained out bones through the collander, and allowed the soup to cool.  I added back in about half the fish I had fished out (ahem) as well as a bunch of the mussels (remember them)?  I also added in some reconstituted wakame strips, and put this in the fridge for lunch at work.  In the morning, post final photograph, while I was dashing out the door for work, cilantro and green onion got added.  This container is large; I got two good soup servings out of it, and it set up really thick when chilled.  At work I nuked it and got some favorable comments about the aroma from other people at the microwave.

No, I didn’t share.  And leftover seafood ended up in a subsequent salad.

The foodie me: Low/no gluten, low sugars, lots of ethnic variety of foods. Seafood, offal, veggies. Farmers' markets. Cooking from scratch, and largely local. The "future" me: I've now moved to my new home in rural western Massachusetts. I am raising chickens (for meat and for eggs) and planning for guinea fowl, Shetland sheep, and probably goats and/or alpaca. Possibly feeder pigs. Raising veggies and going solar.
View all posts by goatsandgreens →
This entry was posted in Cooking, Seafood and tagged Fish, Soups & Stews. Bookmark the permalink.