Last year I bought a huge squash blossom, which promptly got lost in the fridge, and was not re-discovered until Too Late.  Anyhow, this year:

4 of the lil devils, clean them out from within because a bug may be within, lurking, evil on its mind. Not that I’m worried about extra protein, but I like it announced, as it were. Cut off stems.  These blossoms are small but I got six for a dollar, up at the New Milford farmers’ market this past weekend.

Cream cheese. Goat cheese would be preferred, but I wasn’t going to do in this semi-locavore thing by heading back out about 6 or so miles away just to buy goat cheese.

Serreno pepper. Cut accordingly, small bits, include a few seeds (the real hot parts) if you wish. I did NOT use a full pepper. In addition, I only used some seeds.

Buckwheat flour. Or use whatever flour you like. This was handy. 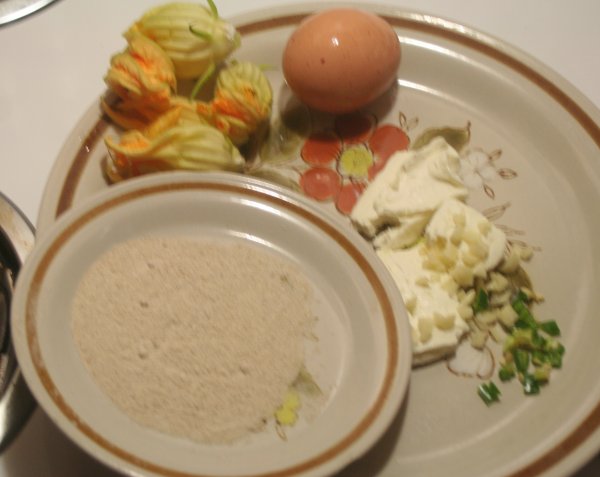 Mix up the cream cheese/goat cheese and the serreno pepper and garlic. Since I was only doing four blossoms, and even if I’d been doing all six, pulling out the Food Processor and having to clean it later was Just Not Going to Happen for this meal. So I have bits o crunchy in my food. I May Well Like Bits O Crunchy. Even spicy Bits O Crunchy.  Maybe especially spicy Bits O Crunchy.

Stuff the blossoms. What I have depicted there actually nearly all fits into those blossoms.

Beat the egg around a bit. Dip blossoms into egg, then into flour. I had to add a little more flour than depicted, for even coverage.

Skillet: Canola oil… I just added enough to just over-coat the bottom of the pan. Raised to medium heat.  Maybe if I had a deep fat fryer I’d deep fat fry these things, but perhaps the whole idea of deep fat frying is a turn-off?  Anyhow my blossoms are small enough such an object isn’t necessary.

Tossed in stuffed squash blossoms onto skillet, and turn a couple of times as needed. Between 3 and 5 minutes,these puppies, at least at this size, are ready. Decant to a plate, let cool for a minute or two, then gnosh. 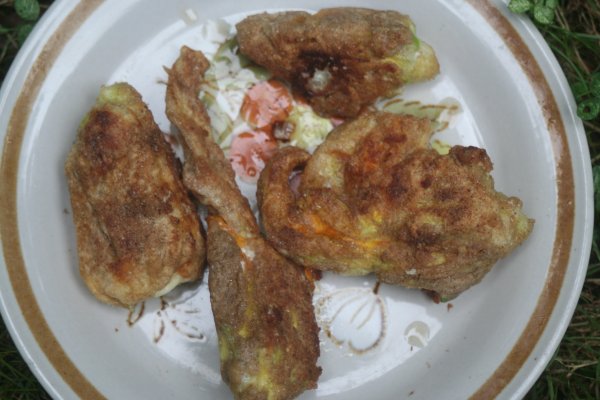 (The other two blossoms I purchased will end up in a salad in a day or two. The extra egg material became an impromptu mini-omlette.)

Rating: 5 out of 5. Mildly crispy, and the seasonings were right on.

The foodie me: Low/no gluten, low sugars, lots of ethnic variety of foods. Seafood, offal, veggies. Farmers' markets. Cooking from scratch, and largely local. The "future" me: I've now moved to my new home in rural western Massachusetts. I am raising chickens (for meat and for eggs) and planning for guinea fowl, Shetland sheep, and probably goats and/or alpaca. Possibly feeder pigs. Raising veggies and going solar.
View all posts by goatsandgreens →
This entry was posted in Appetizers, Cooking, Food Markets, Vegetarian and tagged Squash blossom. Bookmark the permalink.