Just a brief one today.

I’d picked up some cardamom pods from The Silo on my departure from the Indian cooking class, got home and sniffed my spices as had been recommended — the ground cumin and the ground mace were scentless and out they went.

But, I wanted to make something Indian, or at least Indian-infused, for lunch the next day.  And, I had these clams, a combination of mahogany clams and little neck clams, which needed to be steamed up and et.  Mahoganies look just like little neck clams, except their shells are darker, and it appears there is more clam for the bang inside each shell.  I steamed both types up, just barely letting the shells open, and scooped the little morsels out.  A taste test comparison between the two (which is why I’d bought both types) demonstrated a subtle taste difference between them, both being good and tender.

Anyhow, back to the Indian part:  I had mushrooms in the fridge, so I sauteed a few cardamon pods in a little canola oil, cut off the tips of the mushroom stems, and quartered them, tossed them in with the pods and cooked the water out of the mushrooms, as had been recommended.  When they were close to being ready, I added fennel stalks, and guaram masala powder, and a small bit of a hot pepper.

Plopped all this into a dish for work, and scattered in the clams. 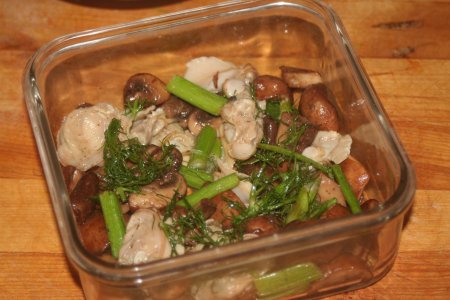 At work, I lightly nuked this for lunch.  Very good, albeit I doubt the clams are authentic.  Need to increase my Indian seasonings collection.

The foodie me: Low/no gluten, low sugars, lots of ethnic variety of foods. Seafood, offal, veggies. Farmers' markets. Cooking from scratch, and largely local. The "future" me: I've now moved to my new home in rural western Massachusetts. I am raising chickens (for meat and for eggs) and planning for guinea fowl, Shetland sheep, and probably goats and/or alpaca. Possibly feeder pigs. Raising veggies and going solar.
View all posts by goatsandgreens →
This entry was posted in Asian & Asian Influenced, Condiments, Cooking, Mushrooms and tagged Clams, mushrooms. Bookmark the permalink.